Golden Orb Weaver
(Nephila Clavipes)
This spider is not dangerous - unless you are an insect...
﻿ 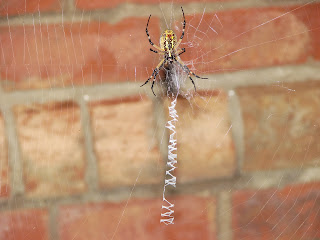 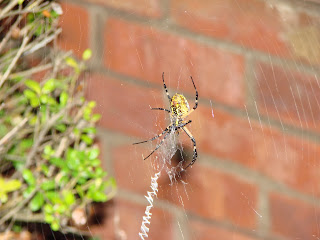 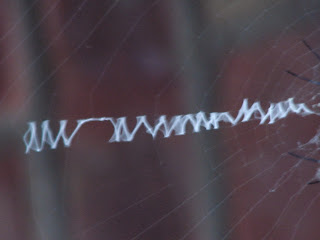 Known as cribellate silk, think of it as 'spider wool'. Yes, in the future, you'll be wearing it       -and then some.

Email ThisBlogThis!Share to TwitterShare to FacebookShare to Pinterest
'Nudges and Nuance'
Most of what we are faced with in life responds best with a light touch. Of course there are times for bold steps and aggressive action to effectively deal with a situation or condition.
When you observe an orb weaver going about spinning her web, you'll see an efficient pace about her that does not appear rushed. With confident negotiation of seemingly precarious construction steps, she goes about extracting and connecting her variety of silk strands based upon which part of her web she is constructing; anchor lines, radials, capture spiral, etc.
This made me contemplate the combination of small steps performed with a greater grasp of the whole journey. Tiny steps don't seem so tiny when they are appreciated as a part of a grand performance. Conversely, what seems insurmountable when taken in it's entirety becomes doable when viewed in 'baby steps' and logical stages. It's the 'How do you eat an elephant?' question/answer thing. (One bite at a time) We can also lose some of the tendency to be so judgmental with this insight; on ourselves and others. Energy is freed and released by removing the pressure to figure out everything in advance.
The Golden Orb (Nephila Clavipes) is not trying to impress while in fact, being very impressive. I enjoyed bringing people who were not exactly 'aracho-fans' to view her. This only went to further prove the idea about fearing what we do not understand and experiencing what a little knowledge does for that fear. It can dissipate it and in some cases, blow it entirely away! I received immense inner-satisfaction in having a woman come to where she was referring to a spider as 'beautiful'. Wow... (The fuzzy silk strands which she adds to her web are intended as a visual cue for both the un-wanted and the desirable; in her eyes - all eight!)
I was also fortunate to capture video of this spider displaying a peculiar behavior I had not seen before. After she accommodated my close-up photography, she decided enough was enough. Like a monkey that jumps up against the bars and spreads out all fours, she used all 'eights' and began to bounce her body, with a 3" leg-span, against her rather large web. This made the whole web bounce and let us say, we both were having an incredible communication process. Read: Connection. That visual memory still gets me jazzed... The only thing missing was the monkey sounds! I apologized to her and left her to settle down. I'll have to load that clip on YouTube.
When we increase our awareness of how powerful the little 'nudges' can be when applied with the 'nuance' of experience and vision, we enable ourselves and others to construct an otherwise impossible looking and brilliant web of life.
Rocky reminded his son in the last sequel; "The world ain't all sunshine and rainbows..."
I'll preface my 'little ditty' below like Rock did with his son;
"Let me tell you something you already know..."
I hope it provides a few capture threads or anchor lines for your next grand design; come rain or shine... which will.
'Nudges and Nuance'﻿
An odd couple-they
are loaded with power
to change a whole day
Like slivers and slices
of things most un-seen
Like forces that hold you
in space in between
The bars of a jail cell
or barbed wire fence
Are you following this, friend?
Does my verse make some sense?
The point being made here
Fair question you ask
Just how can this ditty
help finish your task?
Like mountains and monsters
that challenge the day
With nudges and nuance
you'll craft a new way
To climb up that mountain
to fall down and pray
With nudges and nuance
you'll show them the way
It's nudges and nuance
An artist's best friends
and God's still-small-whisper
that thunder depends
Prepared to be buffeted
battered and torn
for life's not just sunshine
nor always so warm
The open seas rough
and the gales they do blow
Best batten down feelings
unwilling to go
For nudges and nuance
by awkwardly travel
the mystery of life
does then slowly unravel
Revealing at first
just a glimpse of her sources
with ample examples
of courses remorse-less
So stay thee in harbor
if you're not this day
Of  the substance intrepid
and bold - on display
Posted by GMLesley at 11:39 AM No comments:

"When you contemplate the difference
between true and what is truth
Take a moment and imagine
There is ruthless...
and there's Ruth

So while one of them is heartless
And oft valued, none-the-less
The other has ability to comfort
and to bless

To your meaningful companions
made of light-defining love...
From the grace of your composure
Feel the strength that's from above"

I have found that the honest and sincere pursuit of Truth is self-fueled and energizing. If you find it draining, take a different course.

Listen to the silky you.
Posted by GMLesley at 10:55 AM No comments:

Email ThisBlogThis!Share to TwitterShare to FacebookShare to Pinterest
SpiderLogic helps us to understand the difference between what may be 'true' and Truth. Here's a spin on that:

I heard a story that on the morning before the Battle of Little Bighorn, General Custer ran into Sitting Bull and Crazy Horse at the Starbuck's in Sheridan, Wyoming.

Custer; then a Lieutenant Colonel, boasted to the Native Americans of the prowess and over-whelming force of the U.S. Army. The Indians best beware of a fight they could not possibly win.

Crazy Horse gave a solemn glance toward Sitting Bull and then with a sly grin aimed at Custer said: "That may be true... But the Truth is...'Not today'."

'True' may come, go and change.

Truth requires no timepiece, calendar or permission.
Posted by GMLesley at 10:07 AM No comments: 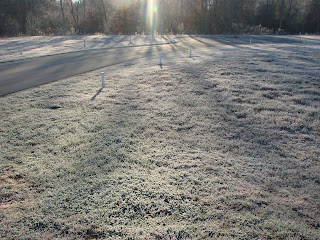 There is a warmth... even in the frost
When hearts come together
That once had been lost.

Posted by GMLesley at 9:07 AM No comments:

"Put these things into practice...devote yourself to them...and all may see your progress."
1 Timothy 4:15

Okay, Timothy; in the Thanksgiving spirit, here goes a few:

So let's go practice! And pro-gress.

Cheers.
Posted by GMLesley at 8:53 AM No comments: 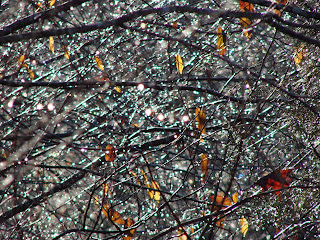 Bringing clarity to Vision can often be difficult... ﻿
Posted by GMLesley at 10:39 PM No comments:

Email ThisBlogThis!Share to TwitterShare to FacebookShare to Pinterest
You know, there is so much material and information on the subject of 'Vision' that it doesn't exactly help you see things more clearly. Though I'm not really big on positive thinking any more than I am thinking negatively, I do try and see things 'as they are'. Call me a practical psychologist.

I find that an interesting and leading concept. The key word is 'better'... Even if what is being seen is undesirable, bad, sad, whatever, clarity is valuable. And valuable is better. You can better deal with what is clear than what is obfuscated or foggy. And that will help you to keep moving forward and toward... with faith, patience, passion... and better vision. 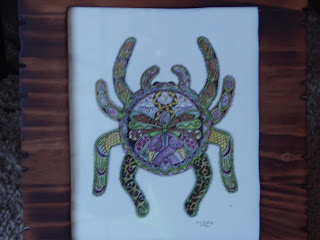 Posted by GMLesley at 6:56 PM No comments:

My sister gave me a thoughtful gift when I moved down to Charlotte from Minneapolis last year. It was appropriate... as I was making the trek to work with a development-stage bio-tech company working on the commercialization of biomimetic spider silk.

Its a painting of a spider made up of a mosaic of other animals including swans, butterflies, ladybugs, honey bees and owls. Very spiritual. The artist is Sue Coccia and I thought she had she woven it all together beautifully in her art. There was a bonus that I did not realize at first...

On the back was this little poem:

"If you talk to the animals
They will talk to you
And you will know each other.
If you do not talk to them,
You will not know them,
And what you do not know
You will fear.
What one fears one destroys."
---Chief Dan George

I found the theme strikingly similar to a passage I have on the inside of my laundry room door (yes... a place of inspiration for me!)

See a connection here? Now, if I could teach Keeli, my Aussie Shepherd to wash clothes... ;)

Posted by GMLesley at 8:49 PM No comments:

Definitions can be useful for creating a frame of reference; not a limitation.

noun \ 'i- site\
:state of consciousness which allows for the ability to envision or perceive the intrinsic web of life,
primordial sight or existential vision

In SpiderLogic, i-sight transcends mind-sight and eye-sight. The view is perfect and timeless. Those who develop the skills and senses to employ i-sight are better equipped to view the path forward... and onward... with their quest for greater harmony and joy.

i-ronically...most of our protagonist spider-types do not have the best eye-sight even with the eight eyes most of them have! (some do have less) Hmmm... A few of the species including the Hunters and Jumping spiders do have excellent vision but as a rule, most of the eight-leggers rely on their other, more highly refined senses... including their i-sight, as they perform brilliantly in their daily web-of-life routines.
Posted by GMLesley at 10:52 AM 2 comments: 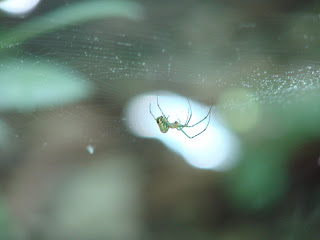 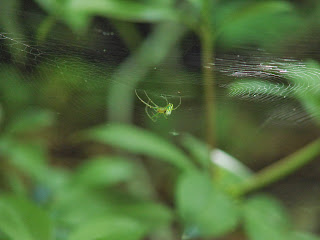 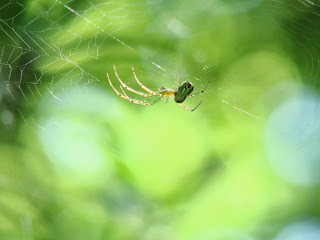 A striking Orchard Orb Weaver (Leucauge Venusta) that proved very photogenic and appeared to enjoy my morning greetings for a few months this past Spring. Graceful with spectacular markings.
(Note all of the weavers are basically harmless to humans. I'll show you some of the other species upcoming including our very own 'Charlotte')
Posted by GMLesley at 2:14 AM No comments:

spiderLogicTM: noun:  derived from the logic of the Spider

a: a particular system of the principles intuited from the Wisdom of Nature,
b: a platform, foundation or basis for drawing inference, gaining perspective or enlightened vision; suitable for application to a fuller understanding of the Web of Life.

I'm filled with awe and gratitude to launch on this Journey... and while many questions about the precise route to be taken remain, I am certain of this:

We are all connected.

The Web of Life is filled with mystery, marvel and the Wisdom of Nature. It is that Wisdom and the vision to discern it, apply it and connect with that I am committed to sharing with you.

I look forward to earning the trust and faith required to provide a touch of guidance when you are in need of it.

It takes more than our eyes...more than eye-sight.

It even takes more than our minds and our mind-sight.

From an amazing creature with over  200 million years of experience, we'll be applying it's eight 'i's of Intuition to guide us on this Journey to greater joy and harmony.

Yes, with the spider and her SpiderLogic.

We travel the Gossamer Trail to rediscover the basic truths.

We are still all connected...


Pushing off from the shore for points yet unknown can be very exhilarating, don't you think?