"He doesn't see sides..."
The Dalai Lama was in Washington DC last week as a guest of the American Enterprise Institute. As a conservative think tank filled with economists and financial leaders who take up capitalistic issues and materialistic topics, one might wonder why the self-described socialist was invited to address such a polar opposite?
The answer from the groups president; Arthur C. Brooks might surprise you. "We're here," he said "to talk about what matters to us most...as an economist it hurts me to tell you, money's not on the list."
Hmmm... Now there's a rich comment. Moral markets anyone?
Must be some inner conflict with Mr. Brooks that it 'hurts' for him to acknowledge his beliefs. None-the-less, it is refreshing and appreciated to see his honesty. Or rather, hear it.
I think the sheer authenticity of the Dalai Lama﻿ as a human being had a little to do with that exposed confliction. Probably a lot...
As a growing segment of our culture is taking up the concern about materialism, the widening income gap; both real and perceived, between the 'haves' and the 'have nots' and over-all equity in our capitalistic society, figures like the Dali Lama act like a bell. His ring is inherently simple, beautiful in it's approach; taking us a bit by surprise; coming at us from the blurred edges of our peripheral comprehension.
Until we hear the ring.
His English is not the best. Especially when he speaks spontaneously. It is powerfully effective, however. If you can allow the 'ring' to reach your soul...
"Being happy and well prove auspiciousness"
"To try to seek right method to bring happy life."
"Where start? From government? No. from individual - then we can make little contribution. That I feel most important."
(We face) a "turning-point century."
Melinda Henneberger, writer for the Washington Post wrote that the Dalia Lama was following his own advice in keeping an open mind and heart about capitalists as a group who "only take money, then exploitation."
"Now, he added, I develop more respect for capitalism."
Ring-ring-ring... I am-I be-I ring in harmony.
"we should be wise-selfish rather than foolish-selfish..." (Happiness comes from self-confidence)
There's a good one to work on for a while!
At the end of the session, Brooks referred to their ever-smiling guest as "the most wonderful man we've met in so much time."
According to Henneberger, there was a young Indian woman in the group with the astute observation that having "no agenda" helps. "He doesn't see sides..."
He does have a mission, though; to profess the virtues of a "happy life."
"He doesn't see sides...Neither does the 'ring'.
Posted by GMLesley at 9:51 AM No comments:

Going with the flow...
Catawba Creek in Gastonia, NC
Compliments of "PAX"
Posted by GMLesley at 7:11 PM No comments:

My earliest memories include special trips with my mother and sisters to Southdale Shopping Center in Edina, MN; a short distance from my childhood home in Minneapolis. As one of the first 'malls' of modern design in the U.S. with anchor stores, indoor shops and open-air commons, this was the time and place where a mother could tell her eight-year-old (Cub Scout!) son to watch his two younger sisters and stay by the goldfish pond while she went into a nearby shop. I was happy to watch those fish for hours, often sneaking a penny or two out of the water while loosing track of my sisters. And there were those two, life-sized wooden children on stilt-like poles stuck in the plant-filled gardens; real enough for my imagination to want to join them. There were live birds in these very tall caged areas; almost free. Indoor nature at it's best. It was clearly imprinting upon me in ways I was scarcely aware of... A unique setting of people and animals amidst natural environment and conceived structure. 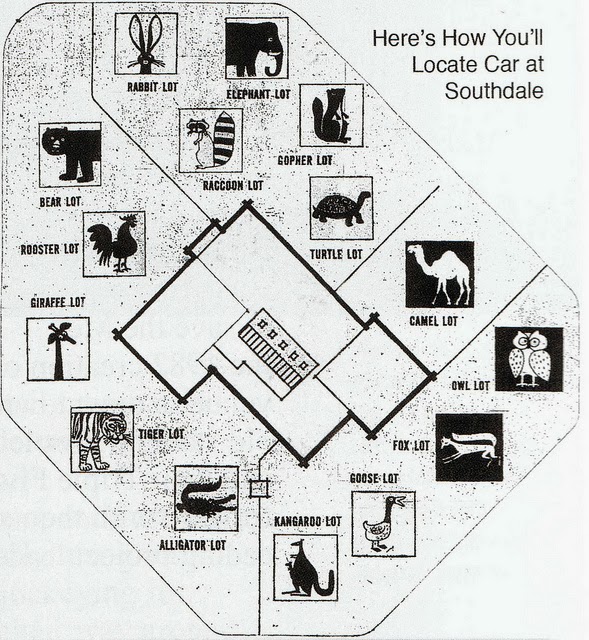 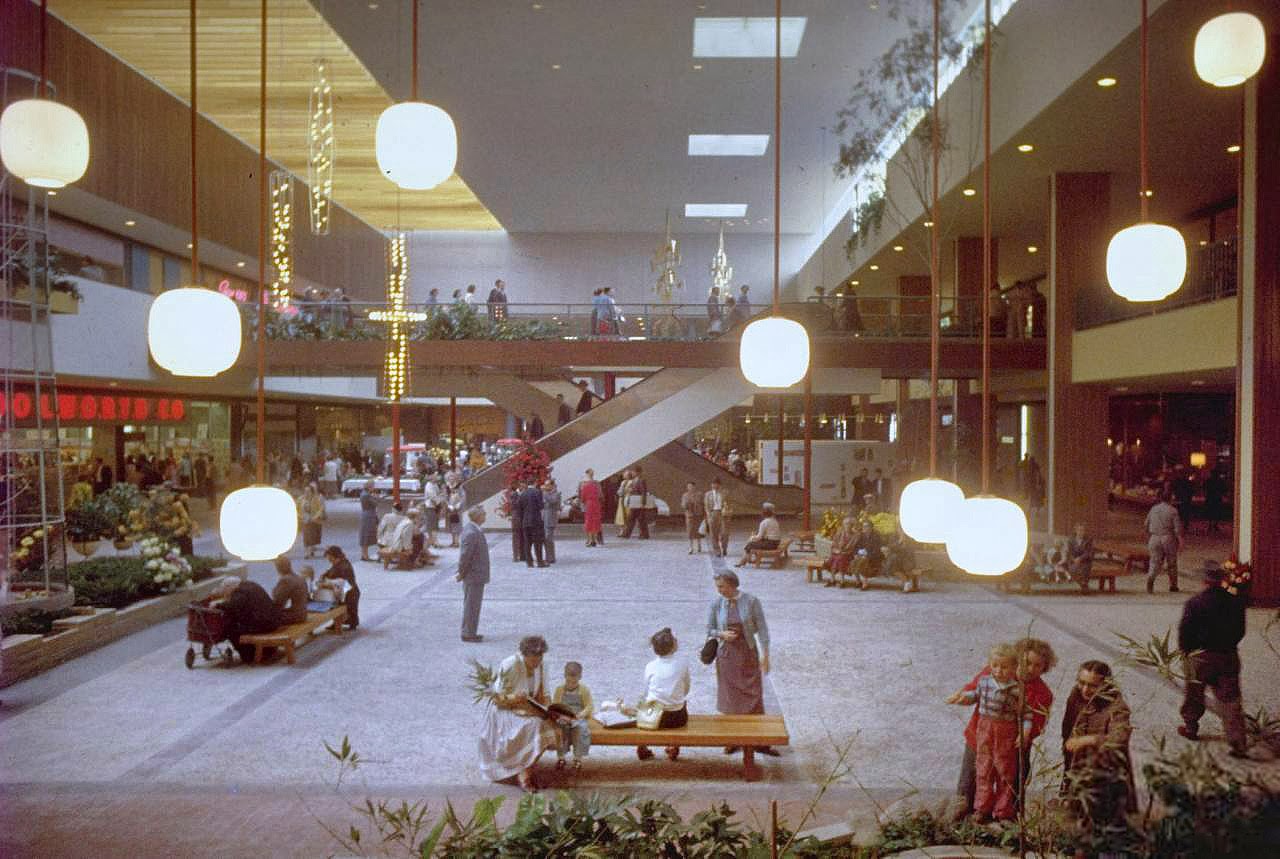 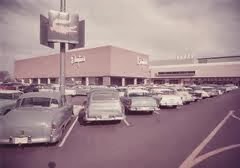 When it was time to leave, often after a special treat from the Fanny Farmer candy store or a sausage stick from Delaurio's Deli, it came down to me finding the car. I always could. You see, Southdale was innovative in that they used animal signs to designate areas among the massive, multi-level parking lots which could be very confusing. There was the Tiger lot, the Elephant, Giraffe, Camel, Owl, Bear, Alligator etc. I had a knack for seeing those signs and remembering it. I also learned early that I had a gift for finding things. Like money. I have always and still do find coins, bills and wallets yet to this day. One of these finds was for thousands. I took special pleasure in re-connecting that billfold with it's rightful owner. (It held a half-inch thick stack of fresh 100's for an international business trip he was about to leave on. He had 'forgotten' that he put his wallet in a partially zipped bike bag that didn't stay put after a fateful bump on his last ride. I came upon it on a run.)

I once found a five dollar bill. That doesn't sound like much after the wallet story above but it was 1962. Five bucks filled up a big gas tank, a bag of groceries or 3 months of daily paper delivery! I was seven and Dad and a friend took me to a Minnesota Vikings game at the old Metropolitan stadium. We were walking in to the game and I can see it like it was yesterday; there on the ground saying "Gary... here I am...pick me up!" I did. Gave it to my Dad and he said "I'll be damned..." in an endearing tone. He gave it back to me and said "That's yours, son. Finders keepers.". I wanted to know where it came from...especially if I was the 'keeper'. My father was a Marine and he also taught us that what's yours is 'earned' as opposed to 'given'. I look back and can see the set-up for understanding much of what I became and how I was formed in those first ten, critical years.

Fast forward 20 years and I'm doing landscape work as a part-timer digging holes and planting bushes. Picture this; it's early spring and there are still snow banks and frozen areas along the edge of this property. I noticed something that didn't seem to belong in the frozen snow. After breaking it out; yep... it's a wallet! When I brought this to the attention of the associate I was working with, he told me he had lost his wallet on this job the fall before. I opened it and viewed the owner's driver's license in the front of it.You got it. It was his and he had never expected to see that again.

In very subtle ways, I was taught to look. I was rewarded for it and so it caught and stuck with me. I was aware that I just saw things. I didn't know that. But I felt it.
Posted by GMLesley at 9:38 AM 1 comment:

Now there's a word that elicits thought. It's an opening. I think of clarity, focus, vision, direction, opportunity. How about for you? Is it something you 'want' or 'need'? Do you feel it lacking?

A pathway, a nudge, a timely piece of chocolate fudge?   ;)

Do you provide it or is it given to you? Do you see this as a gift or a reward? Is it something that others seem to get but not you? Is it reserved for only the 'rich'?

The other morning with Keeli I came across something I had never seen before. Quite special and extraordinary. A pure and brilliant gift... 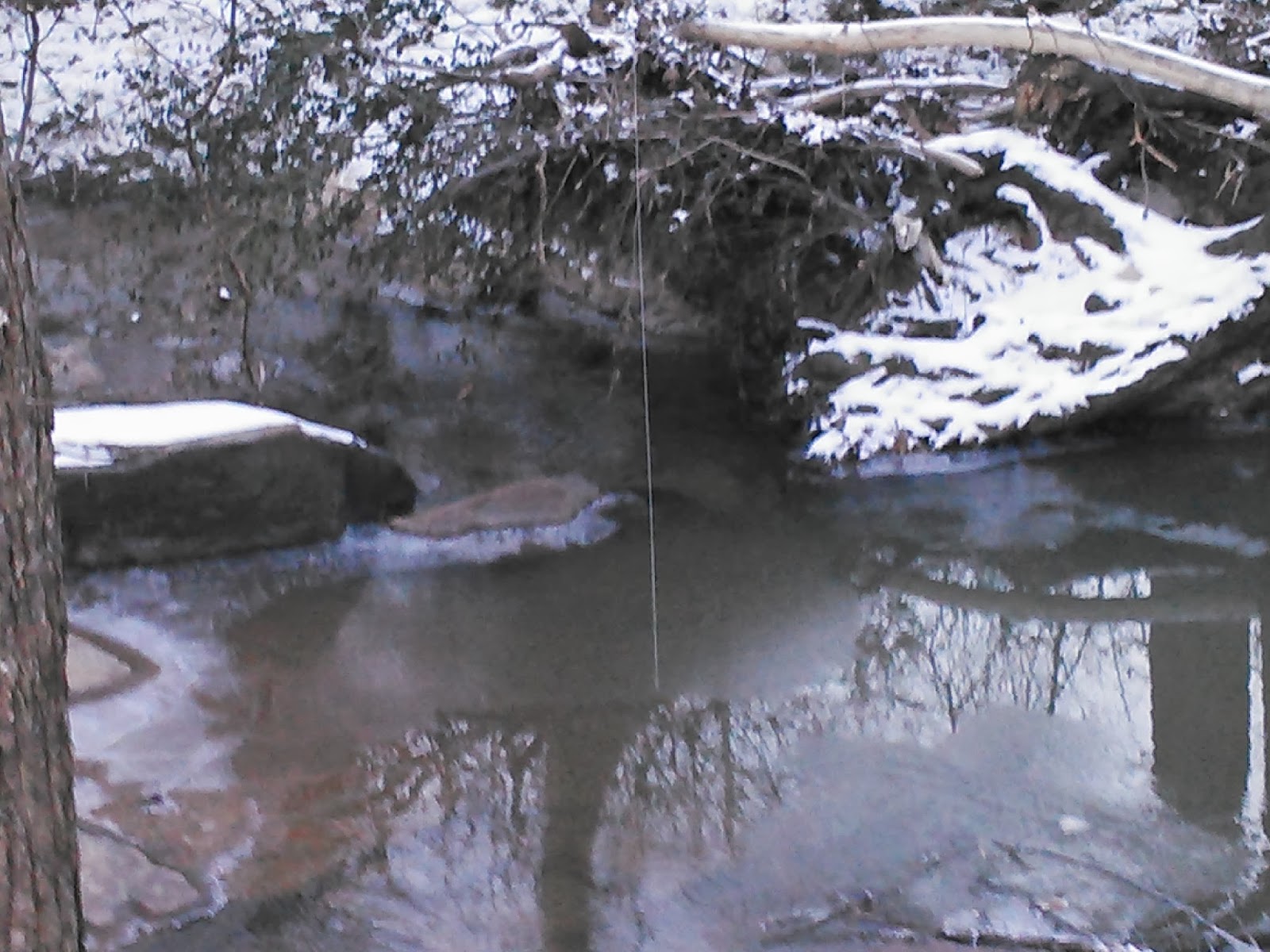 A Frozen Wisp of Gossamer...

The conditions had to be just right. The temperature; about 10 degrees F, the humidity, breeze, lighting. And the timing for me to see it... have access to it... Suspended there from a branch that overhangs a meditative spot I frequent. Right there... a 5 foot line of micro-coating ice crystals on a fiber one tenth the thickness of the finest of human hair. Hanging but giving more a sense of being suspended vertically.

The cell phone picture makes it appear thicker than it really was (click the pic for a little better rendering). And perfectly smooth...How can that happen with 'ice' that coats so finely and evenly? This is a function of some of the most amazing qualities of spider silk; it's composition of an amino acid/protein-based matrix. (Did you know that spiders can deploy their silks to move water droplets in a desired direction?) The science of what occurred there over the Catawba Creek holds unlocked keys to innovative nano-technologies and curve-jumping solutions. We will be seeing some of them soon.


'A frozen wisp of Gossamer...
We met one frosty morning.
A broken thread or lifeline...
To access a prize or warning?
So fine a strand of silken ice...
It swayed in silent stature.
Who's maker left a tell-tale line...
For me who did walk past her.'

We are all, in some form of awareness, looking to access those 'Portals to Heaven' that resonate with our hearts and our spirits. The smallest and finest of threads can lead and connect us to those portals.

They will point out for you the real and direct access to what matters most; like from where that 'frozen wisp of gossamer' really came from.

A combination of events seemingly un-related? I think not.