And this our Lives... 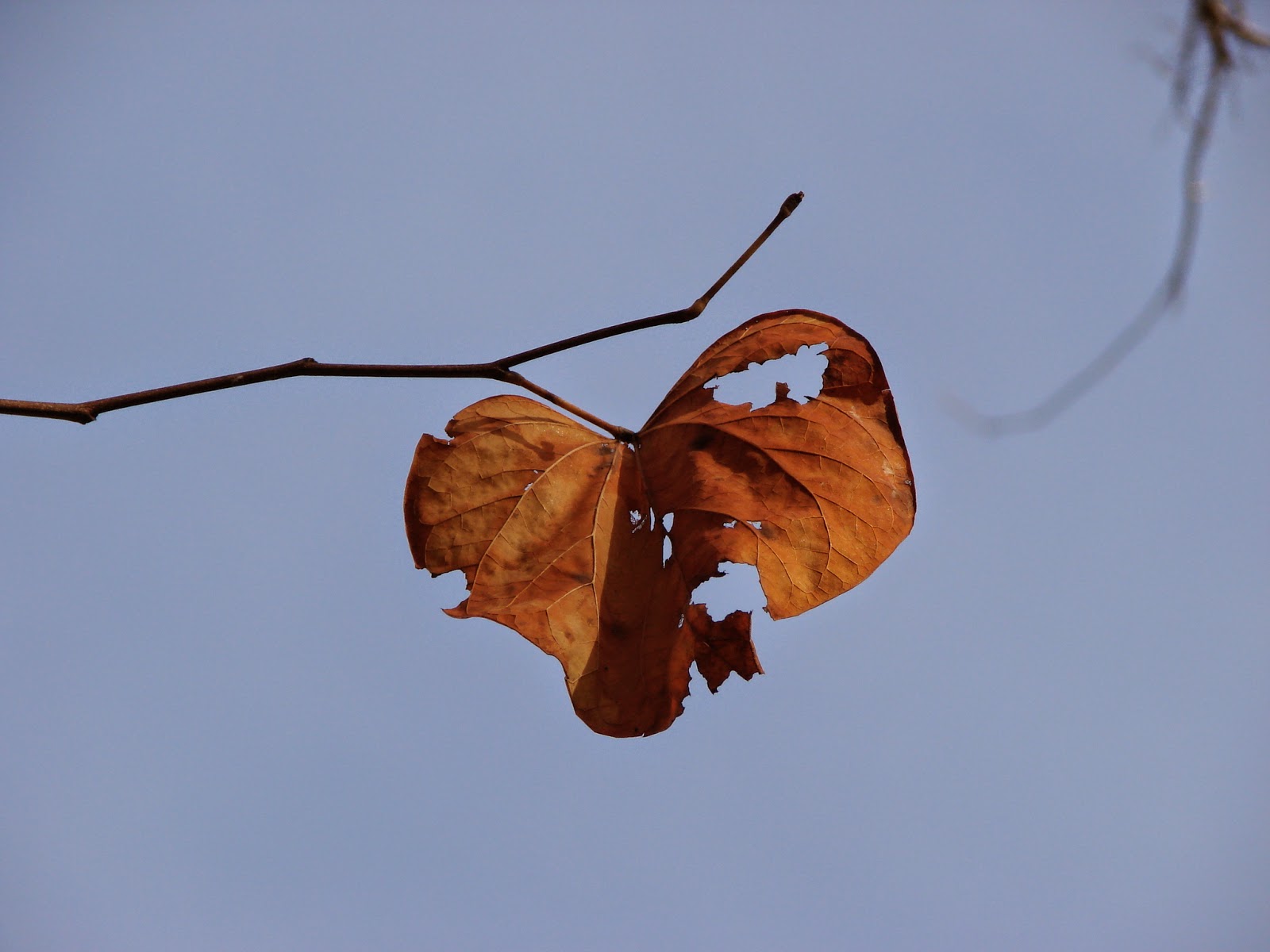 "Sweet; the uses of adversity, which
Like the toad
Ugly and venomous
Wears yet a precious jewel in it's head
And this our lives...
Exempt from public haunt, finds
Tongues in trees... 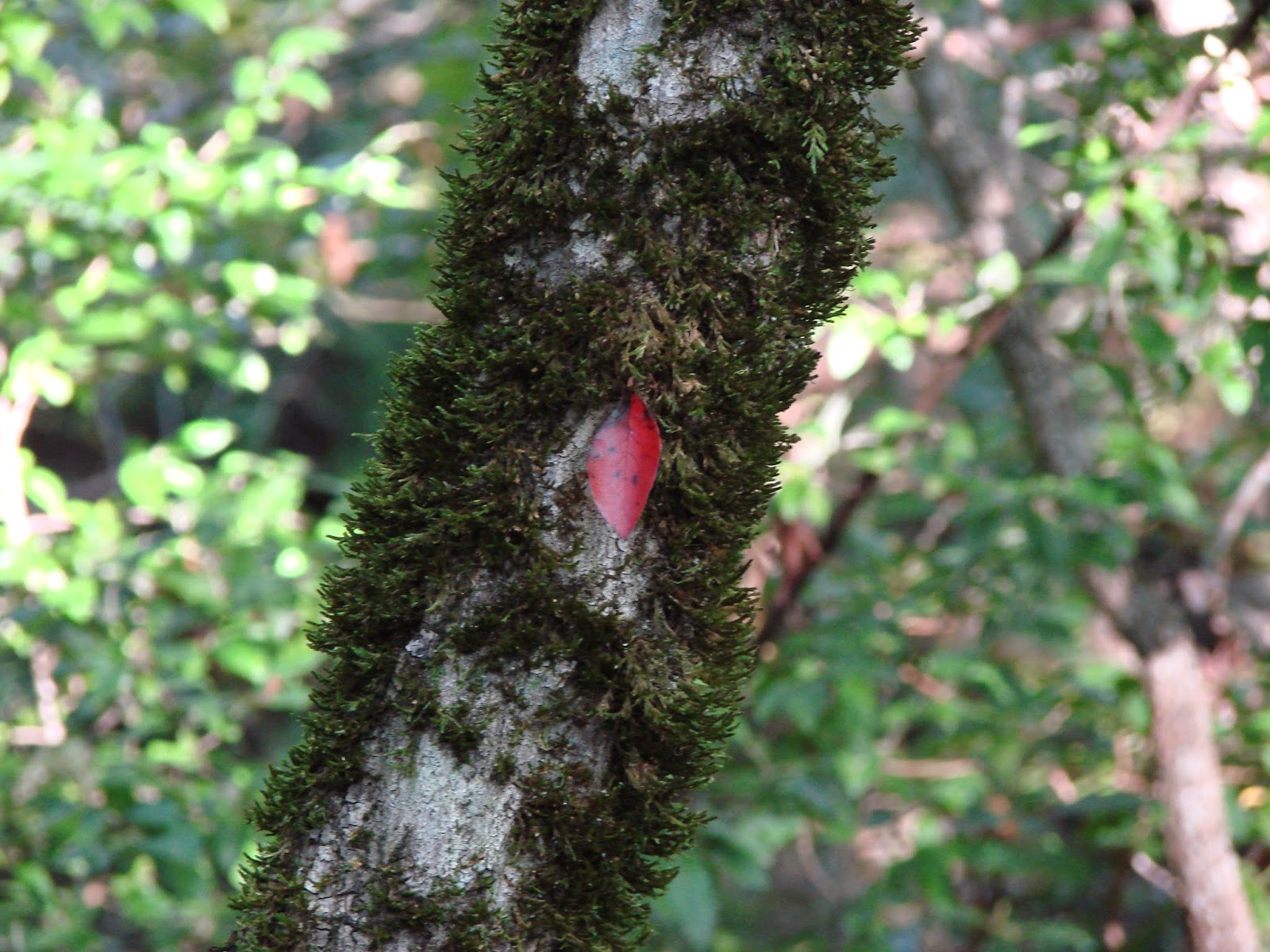 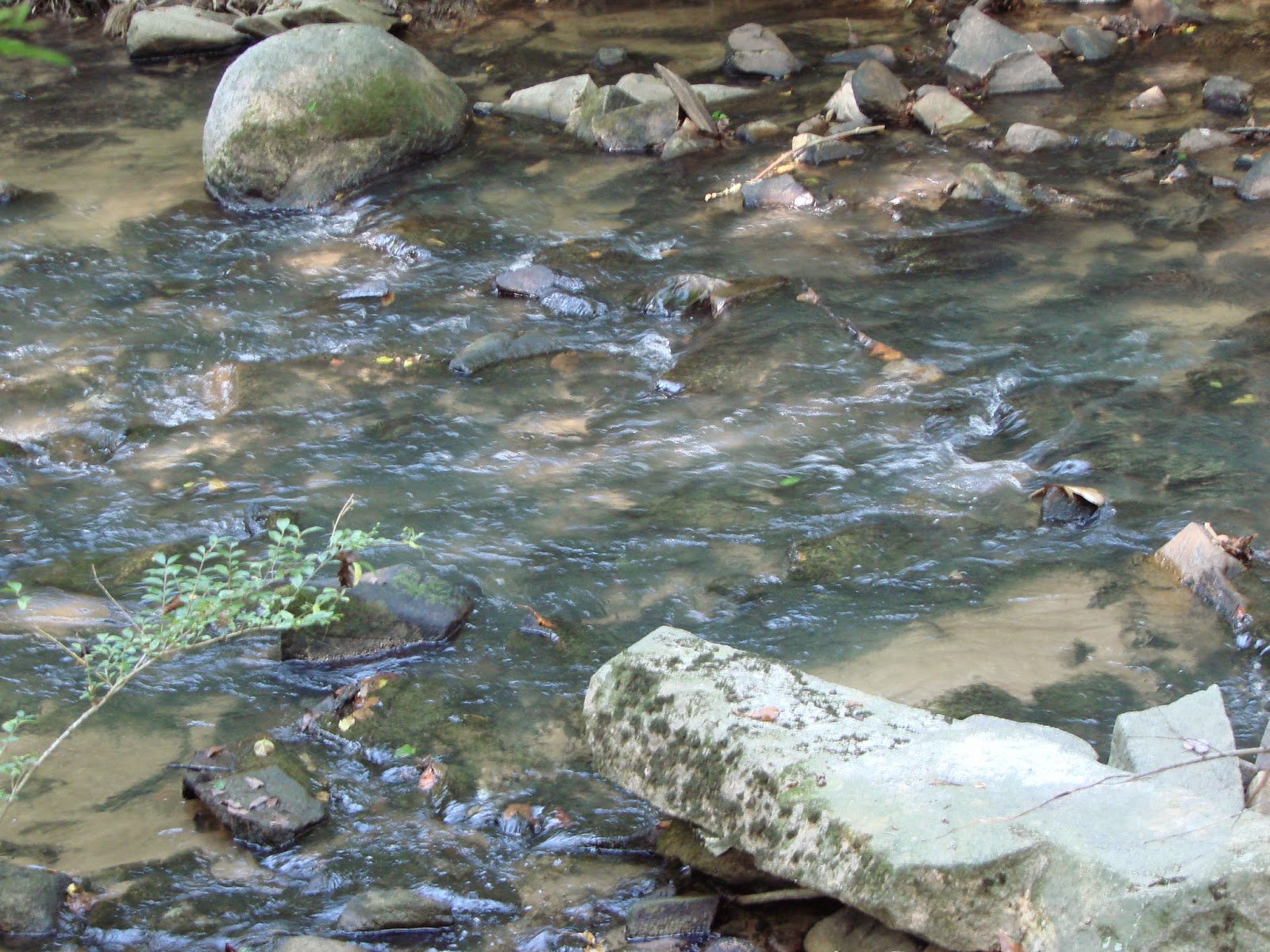 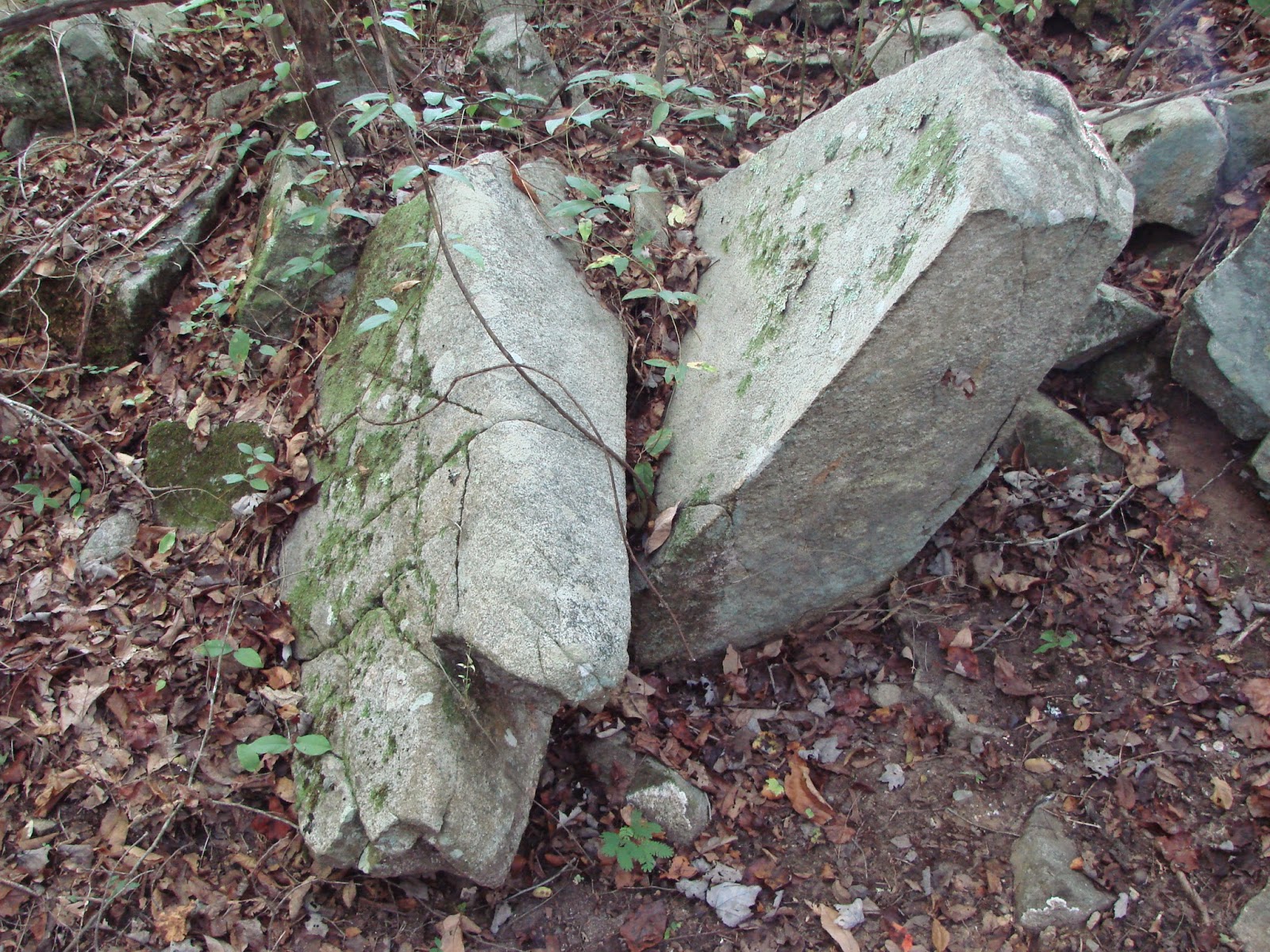 And Good in all things." 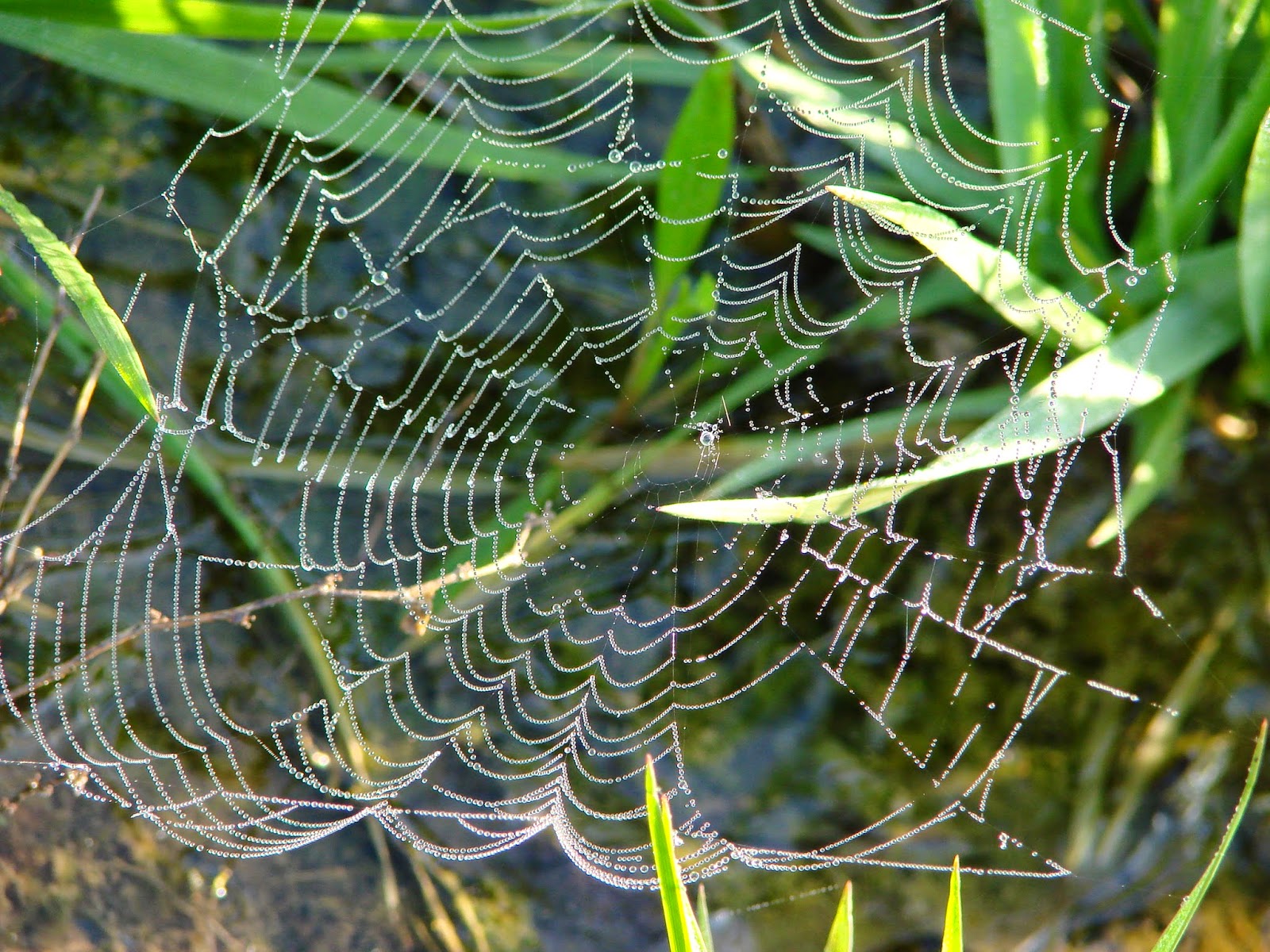 -William Shakespeare
Posted by GMLesley at 10:24 AM No comments:

'Realing' me in...to myself

"Let your adornment be the inner self with the lasting beauty of a gentle and quiet spirit."
- 1 Peter 3:4

Last evening, Keeli and I were finishing our evening walk and it was just after sunset... which seems to be now arriving sooner and sooner. Fall Classic sky scene; collage of oranges and blues and grays washed with cottony-white cumulus and wisps of high altitude cirrus for good measure, escorting the reclining sun to it's relative resting place before another revolution. Another evolution... 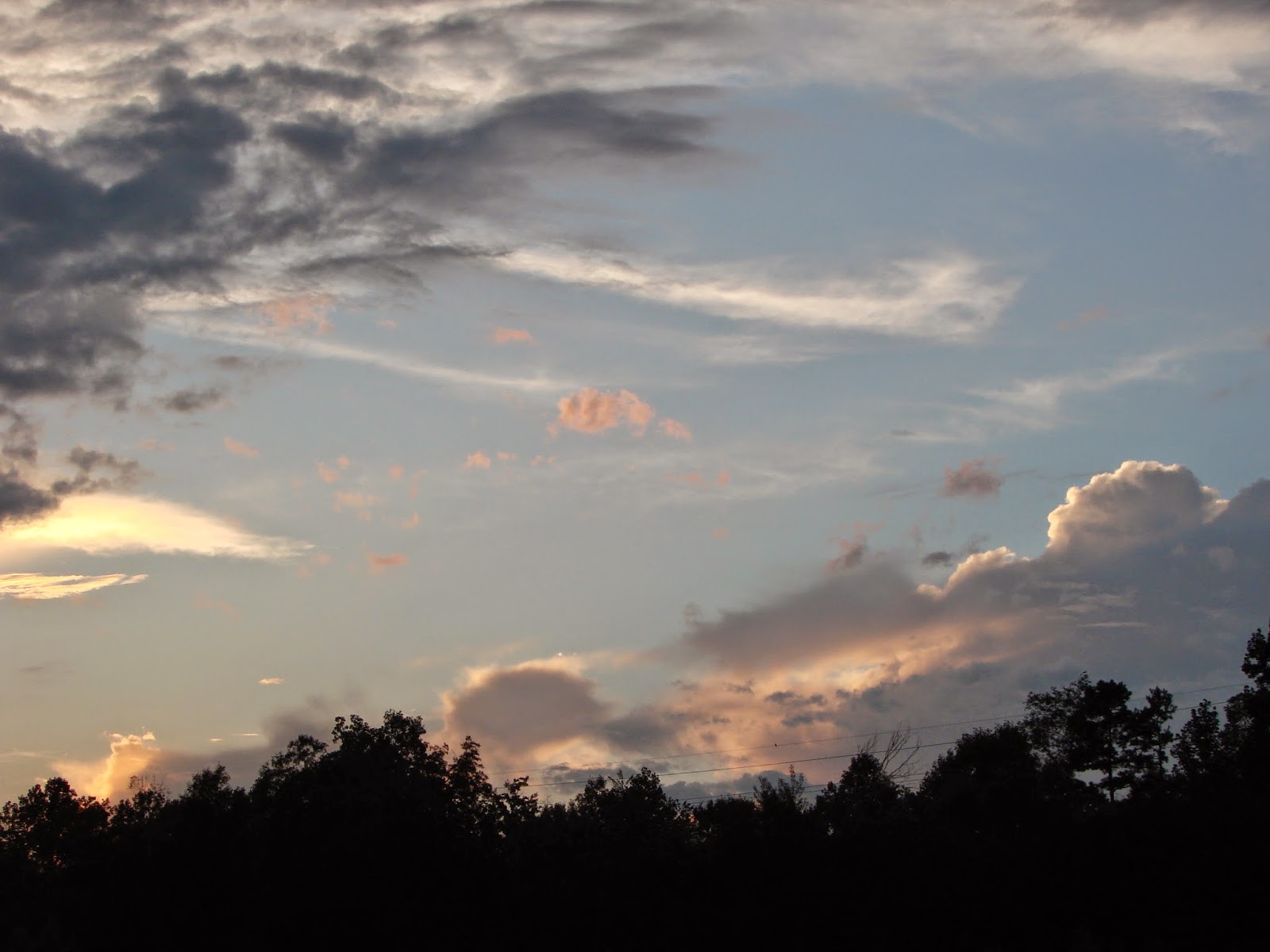 I noticed what I first thought to be  a contrail of sorts against the dramatic western sky but quickly realized that couldn't be.

The undulating movement; like a tight braiding of milky-white, smoky fibers that were now apparent to me just ten feet from my eyes; not in the distant sky, was in reality, a length of spider silk. Wafting lazily in the wind, extending across the street to my right. To my left, about five feet to it's source..  a healthy garden spider; Neoscona Crucifera to be more precise. Boulevard tree firmly in hand... and feet. Her's.

I was purely captivated by the ethereal dancing line. The rather blurry-appearing end of it compared to the finely-focused and tight line that connected directly to her. I had to share this!

Neighbor and dog-walking partner Catherine lives across the street from the spectacle so
I went over and got her and niece Heather to confirm I was not hallucinating. After all, I had been introducing her to spiders for about the past year along many of our walks with our dogs. She had gotten hooked on what used to be a creepy topic.

As they came out of their door, I had already gone back down to where the line was and they were wondering what the heck I was looking at. I made sure hey did not walk into it and pointed out the floating line with the western sky in the background. They were captivated by a few moments of mystery and wonderment until I had them follow it all the way over to Ms. Neo on her leaf.

So there we all stood; in amazement of the long line of super silk, dancing and putting on a gravity-defying show of grace and divine wonder. At times, the end of the line appeared to be grasped by something and brought upward, only to slowly drop back down. I put my finger against the line directly in front of me at about eye level and showed the ladies the stickiness of the silk. It clung to my finger though the contact area was no more than the head of a pin...

Miss Neo was not bothered by us in the least. Maybe she was fishing for gnats? Guess she did catch a nut...

And then she did something that I had not seen before. All of a sudden, the dancing end of the wonder rope starting moving in toward the tree. She was reeling it in! I had just broken contact with the silk and in a matter of seconds, all our six eyes followed the end of her line as it was balled up the size of a poppy seed. She promptly stuck it onto the backside of a leaf she was standing on.

And that was that.

I think we all sort of felt a privileged sense for collectively experiencing that. A connecting moment? For sure. Three captivated humans and a brilliant 'little' spider. This is the Universe affirming our human ascendancy by virtue of our abilities to comprehend such acts while reminding us of our roles as masters of the earth. Oh yes; the responsibilities that come with it, too. I just have to believe the spider has an innate awareness of that. Along with all her nature-mates.

She continued her show by traveling the nearly invisible lines she had already placed and proceeded to develop the framing of her evening web. And as if on queue, after explaining how these spiders will drop down  up to 10 feet with an anchor line and zip-line right back up, she spread all eight legs out wide and nearly pointing upward... and down she went!

Weee! All the way to the sidewalk.

I also witnessed something never before seen by me; a jet-stream of that same wispy line went out nearly horizontal on her way down to the ground. It looked like it fell in line with the anchor line she set as she went back up. Incredible. Maybe reinforcement? There is so much more I'd like to learn about the finer points of web mastery and silk work. As I've pointed out in earlier blogs, many spiders have up to 5 distinct silks dependent upon the function and desired application. Pretty fascinating stuff, for sure.

And just as quickly, up she came; putting in place some more framing.

I am again reminded how joy can be generated and shared in the simple observance of Nature's creatures through out God's Universe.

The vision of the spirit is what truly illuminates our souls. It provides the light of wisdom for life's darker nights.

The lantern is within us. The contrails of wisdom waft in front of us, backlit by the setting sun and rolling clouds, reminding us that another revolution brings another evolution... closer to what is real...further from the illusions...closer to the oneness with our Creator. Closer to ourselves. 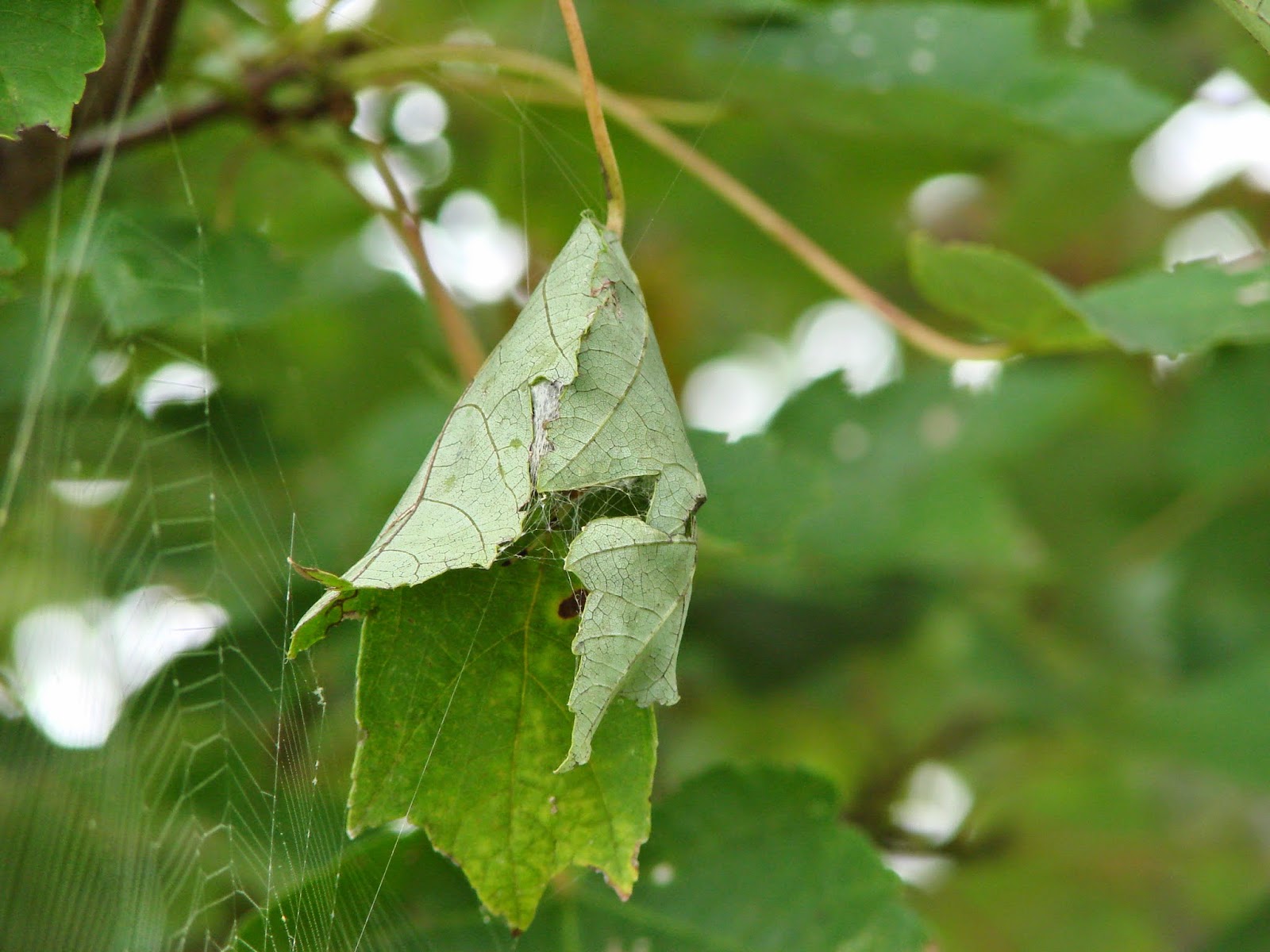 Pictured above is Ms. Neo's 'Day hut'. She uses her silk to shape the cone and fill in the gaps. Wonderfully ingenious. 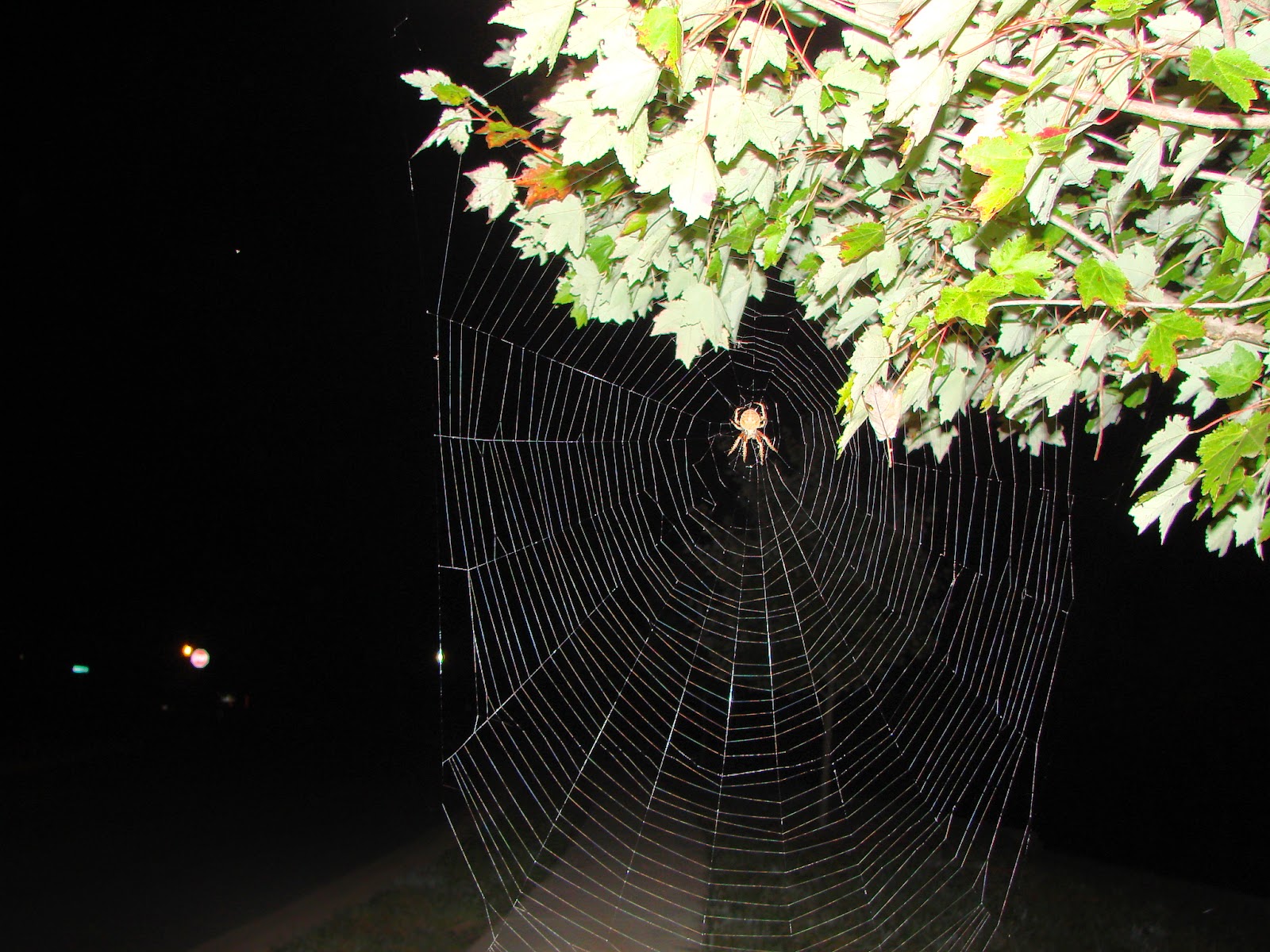 Equally so is her picturesque web work; anchored to the ground and to points across the tree.
She has a series of lines she can navigate to reach her hut.

"In tragic life, God wot,
No villain need be.
Passions spin the plot...We are betrayed
by what is false within."
-George Meredith 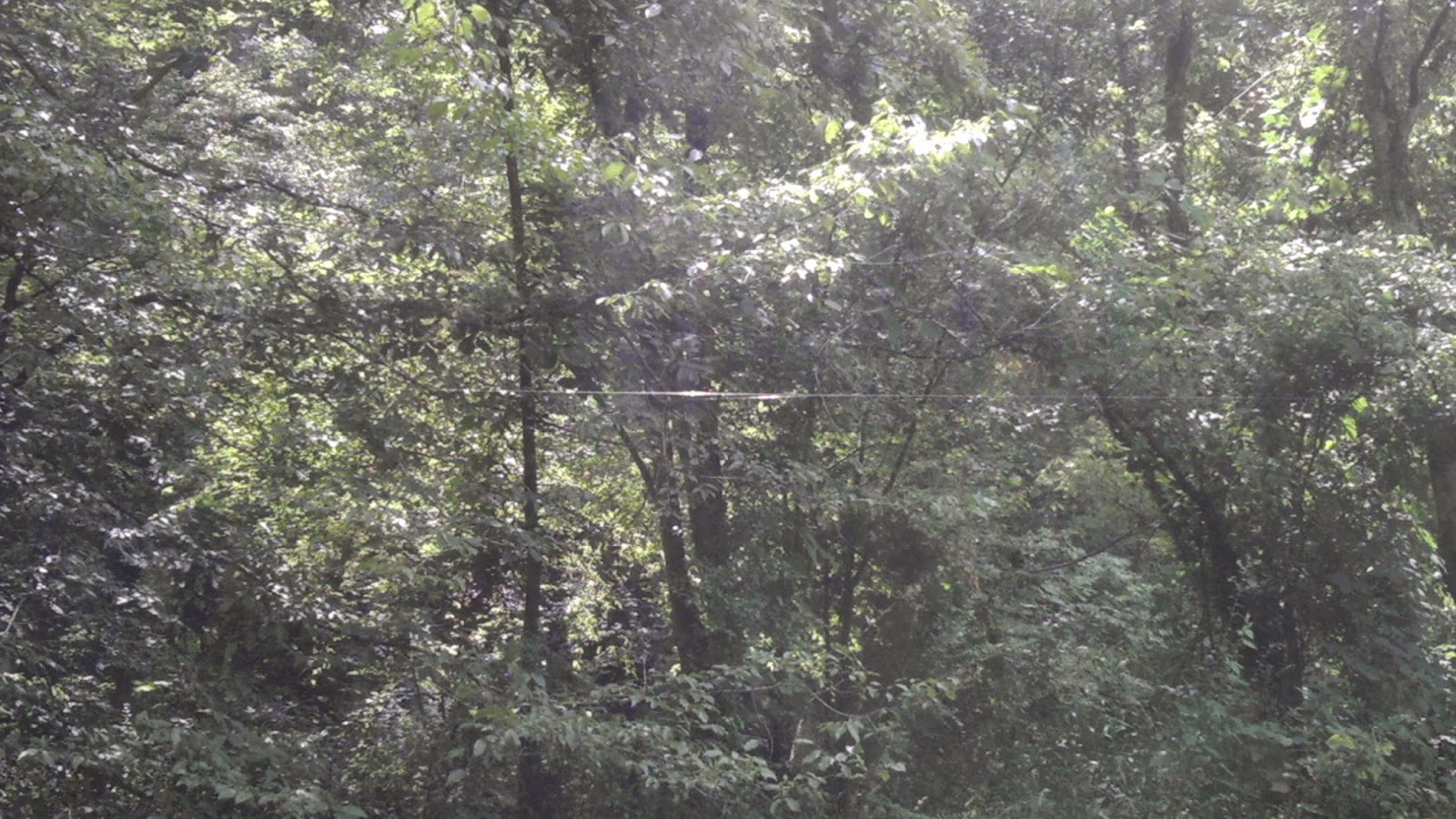 Larger orb-weaving spiders can dispatch anchor line silks over 20 feet, though they do not always catch a desirous anchor point.
This line was nearly 25 feet from a large oak tree, across a pathway and clear area to the bushes on the other side.
"He opened their understanding... that they might comprehend..."
-Luke 24:25
Posted by GMLesley at 11:09 PM 1 comment:

Fall is rising along Gossamer Trail
Starting my third Fall season here in North Carolina, I remain truly amazed at the bursting of new blooms, sounds and sites that surpass the simple falling of leaves.
There is a blend here that fuses, what are for me, the more traditional elements of Fall; with a magical, mystical pallet of life and activity. A second-Spring of sorts...
I'm sure this is precisely what attracts so many to this part of the country; mixing familiarity with newness; a stimulating combination with the etxremes shaved off at the ends; no Fargo 'frigid' and conversely; no Mississippi 'melt-down'. The locals may take this for granted. The 'transplants'; particularly those from points north, find it delightfully delectable.
-From the first week of September; a sampling of Nature's treats along my backyard path. Enjoy!
﻿ 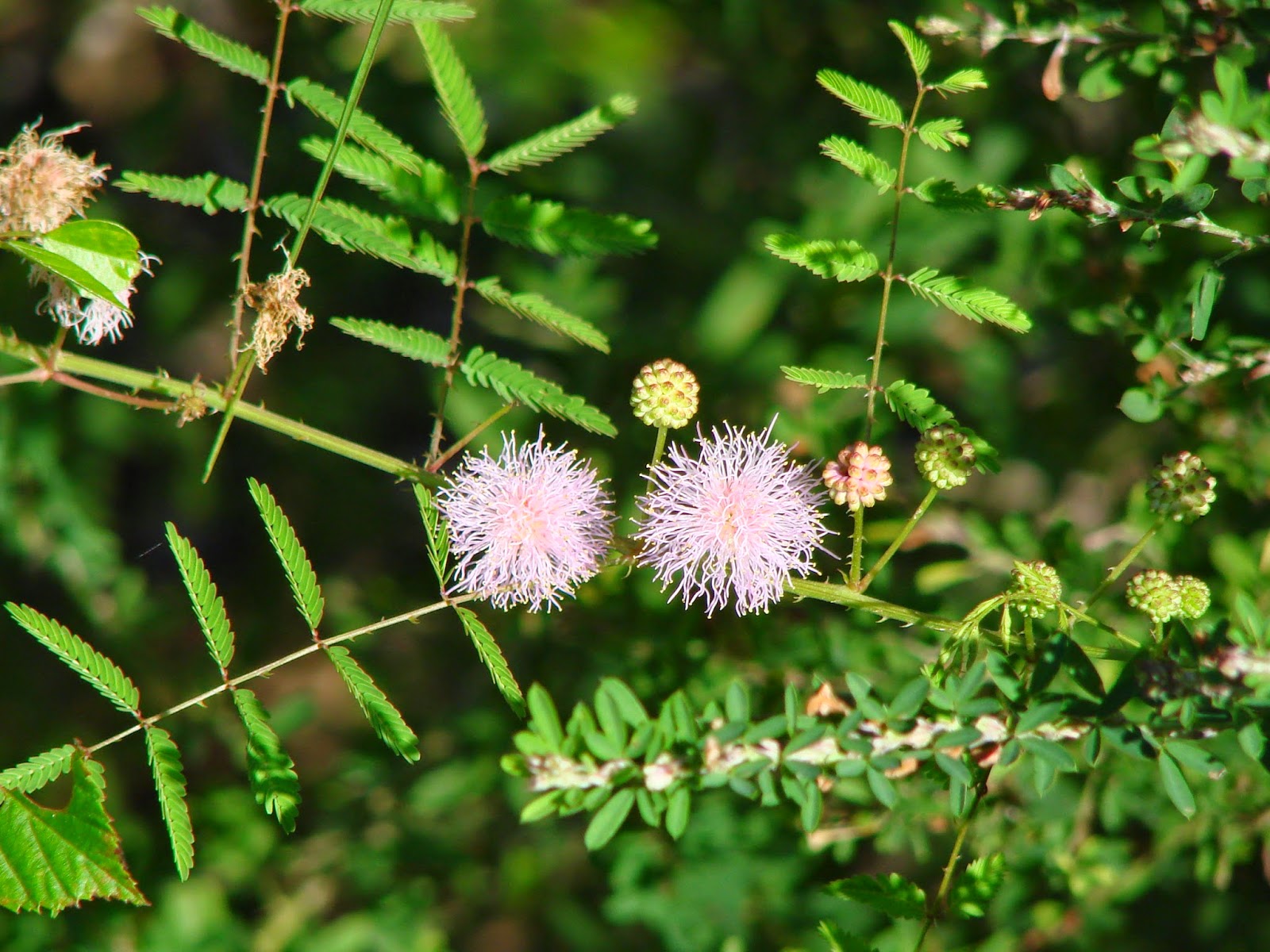 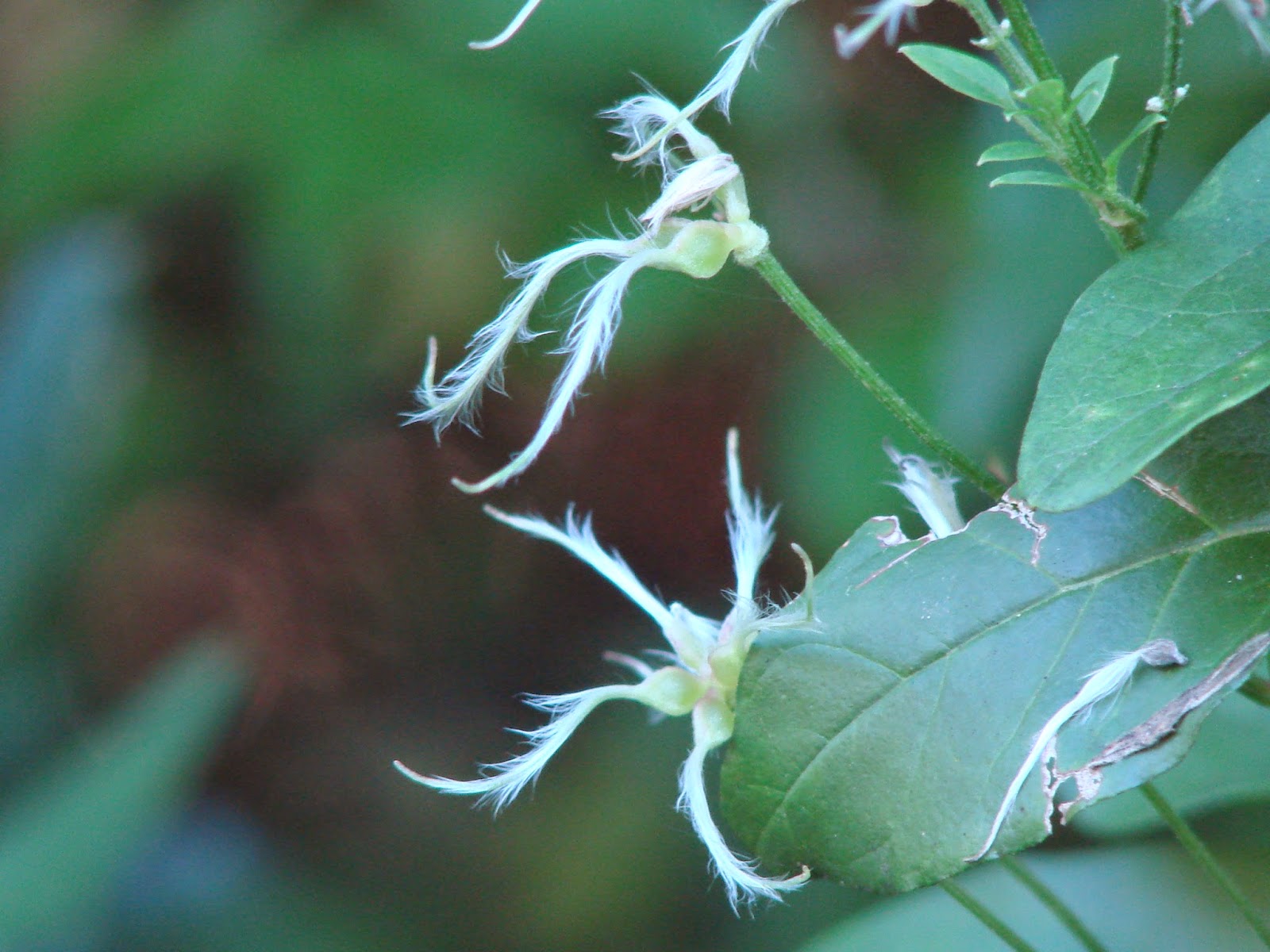 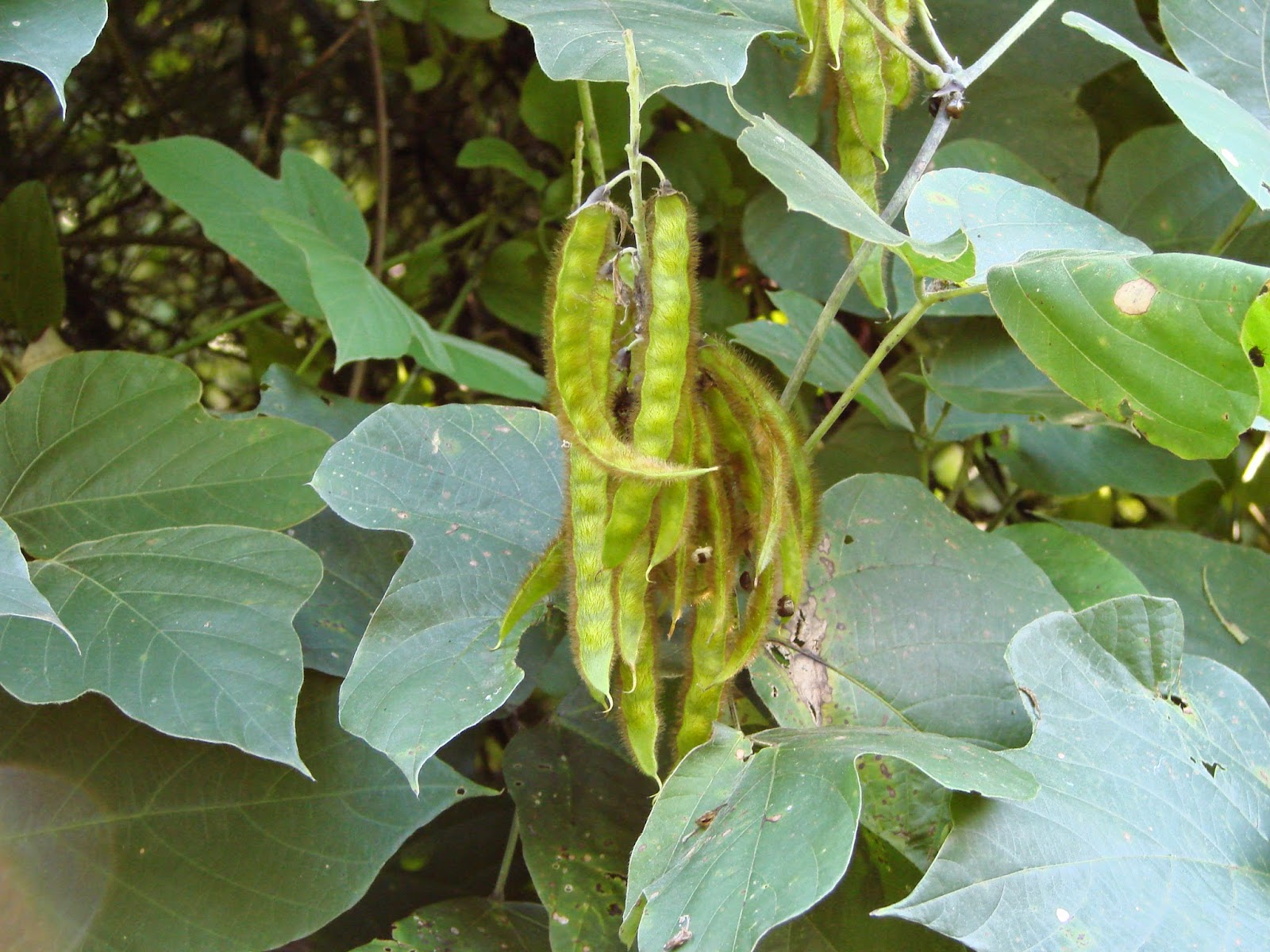 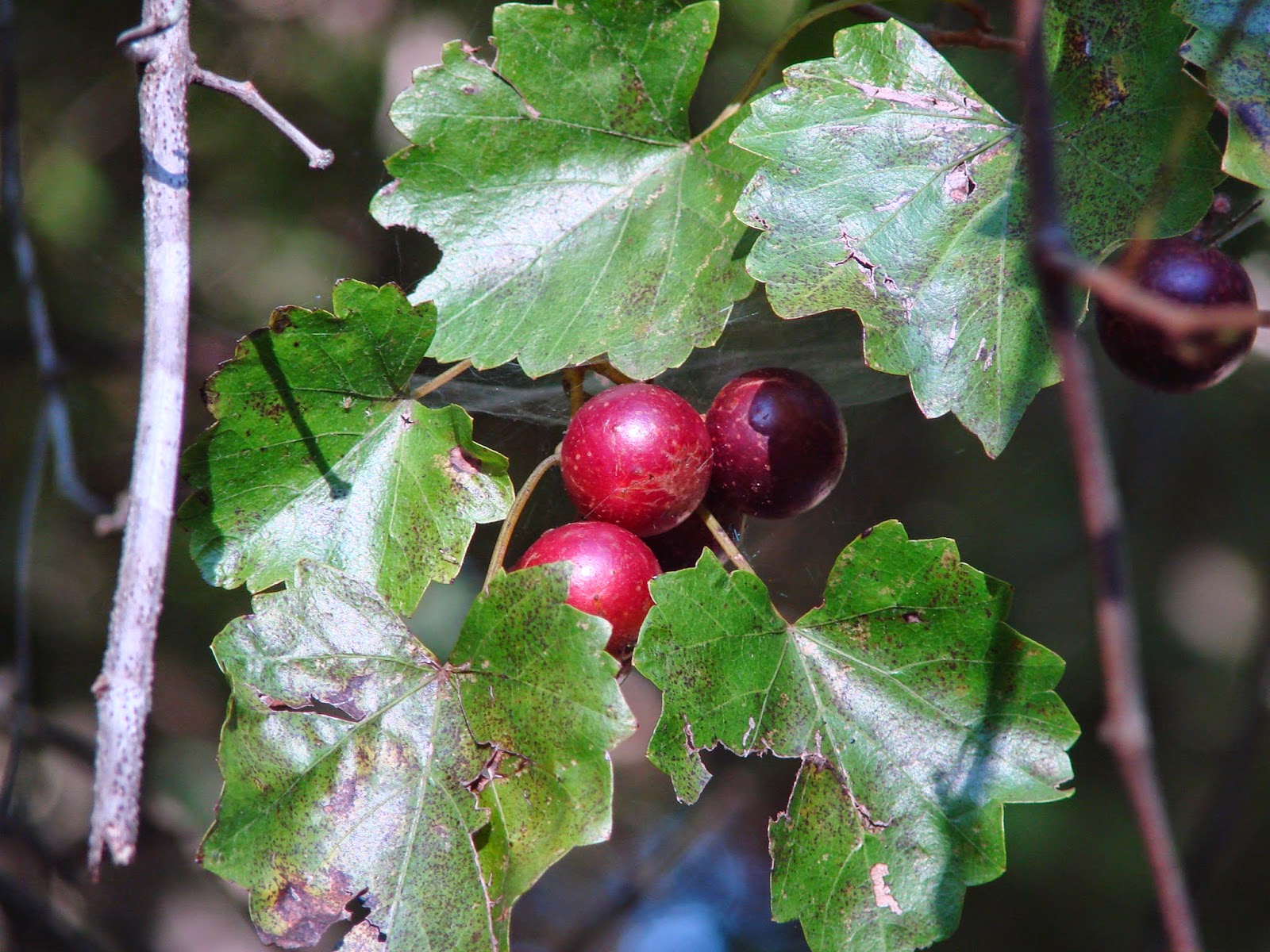 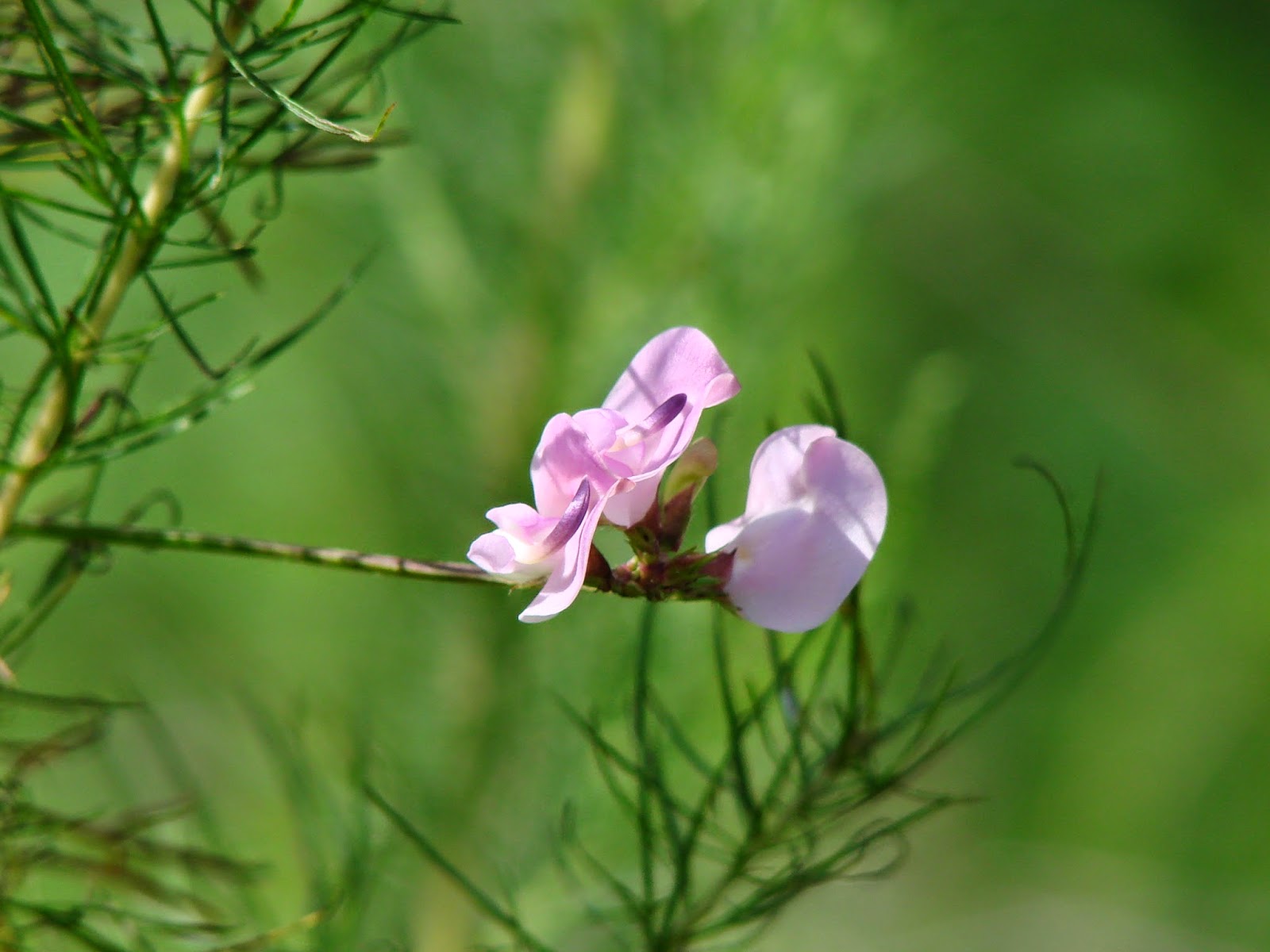 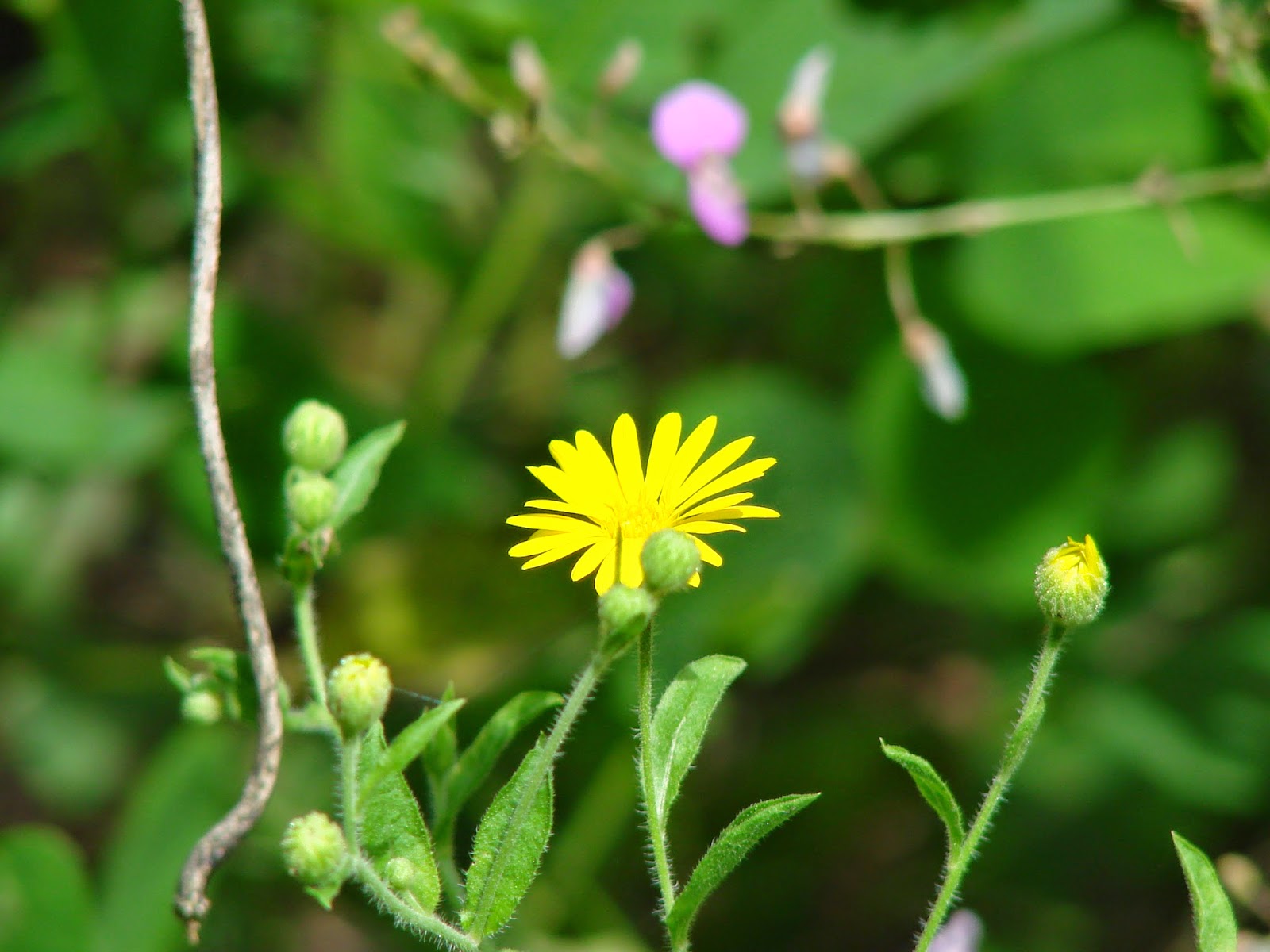 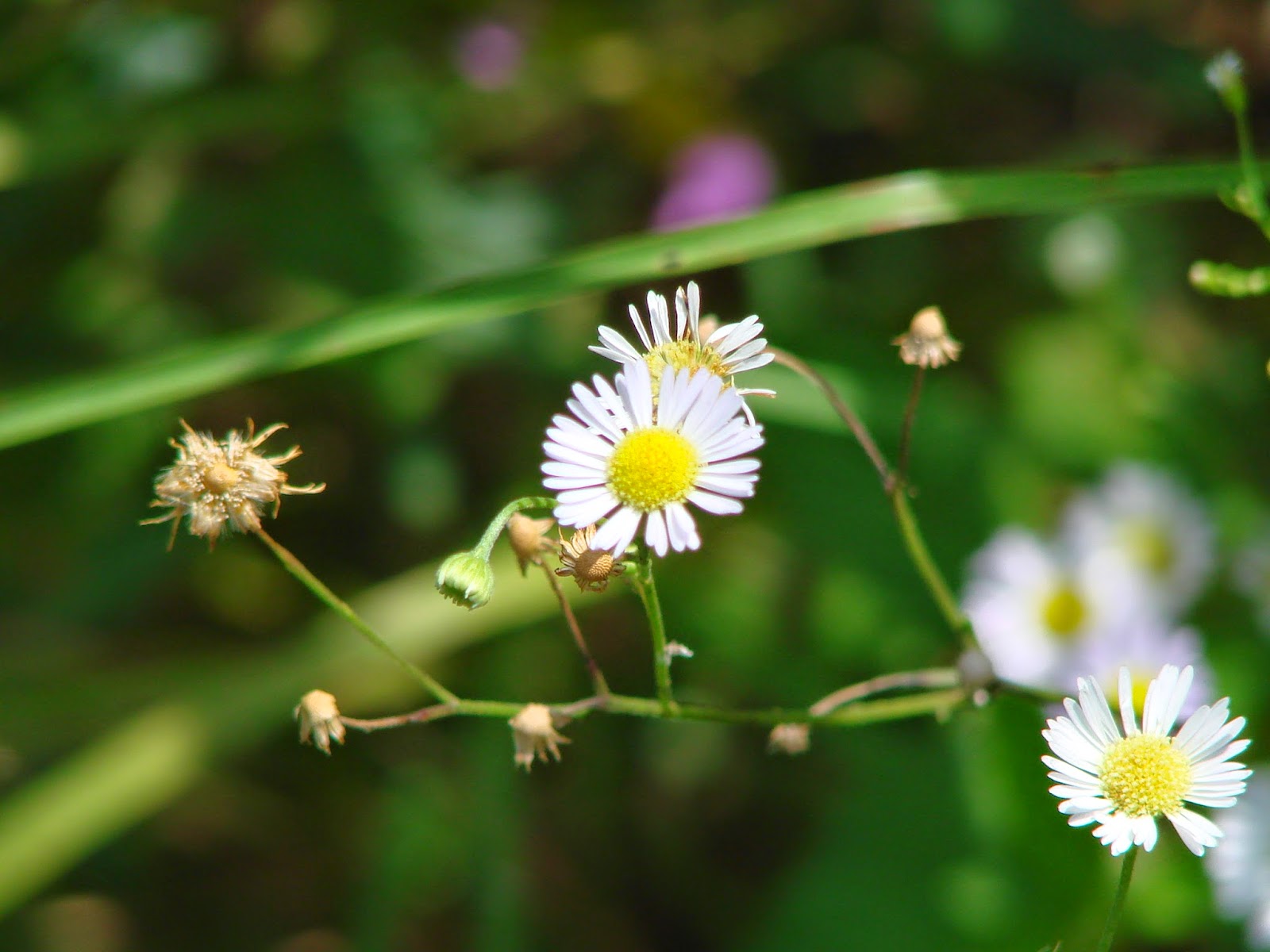 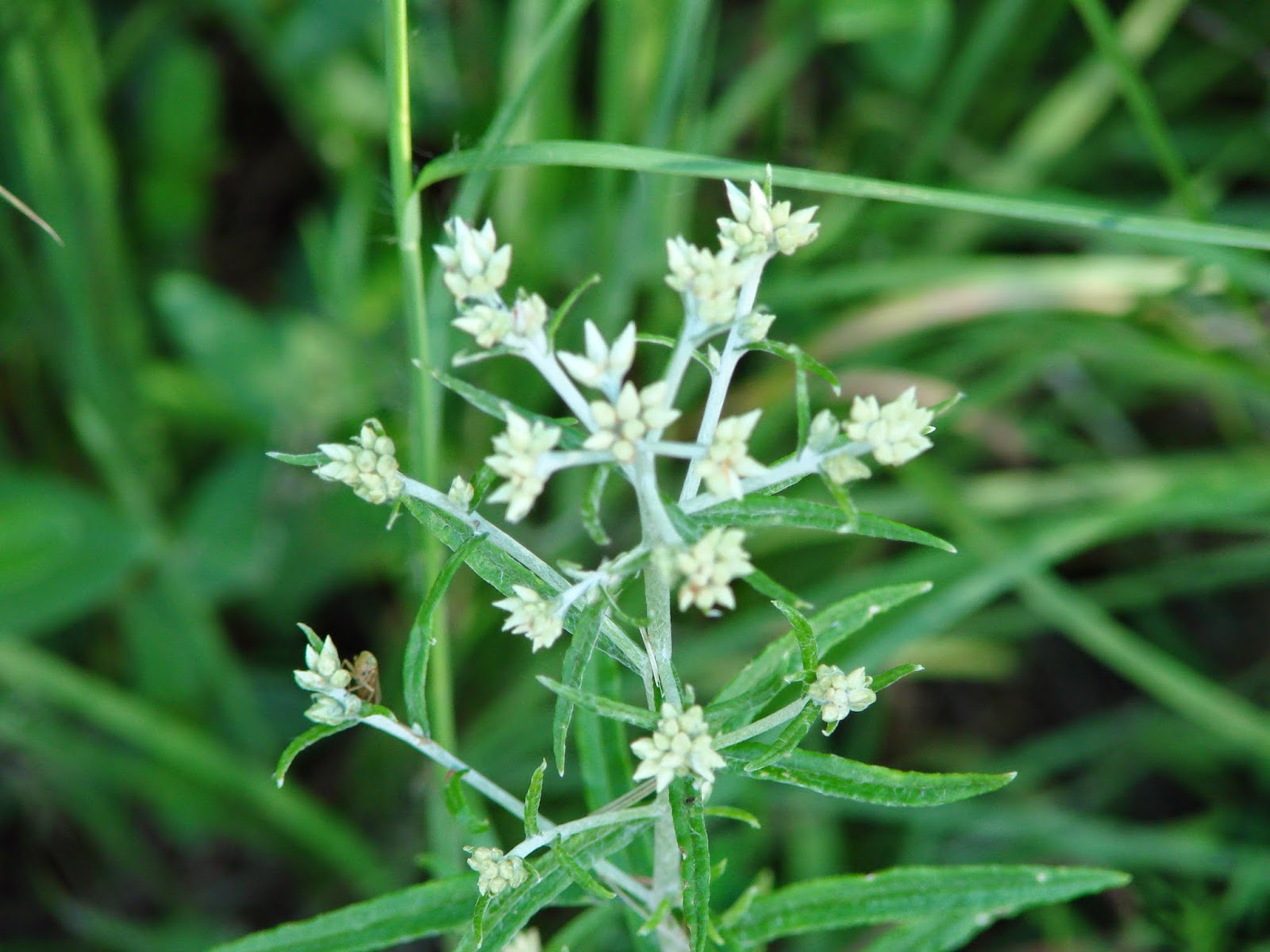 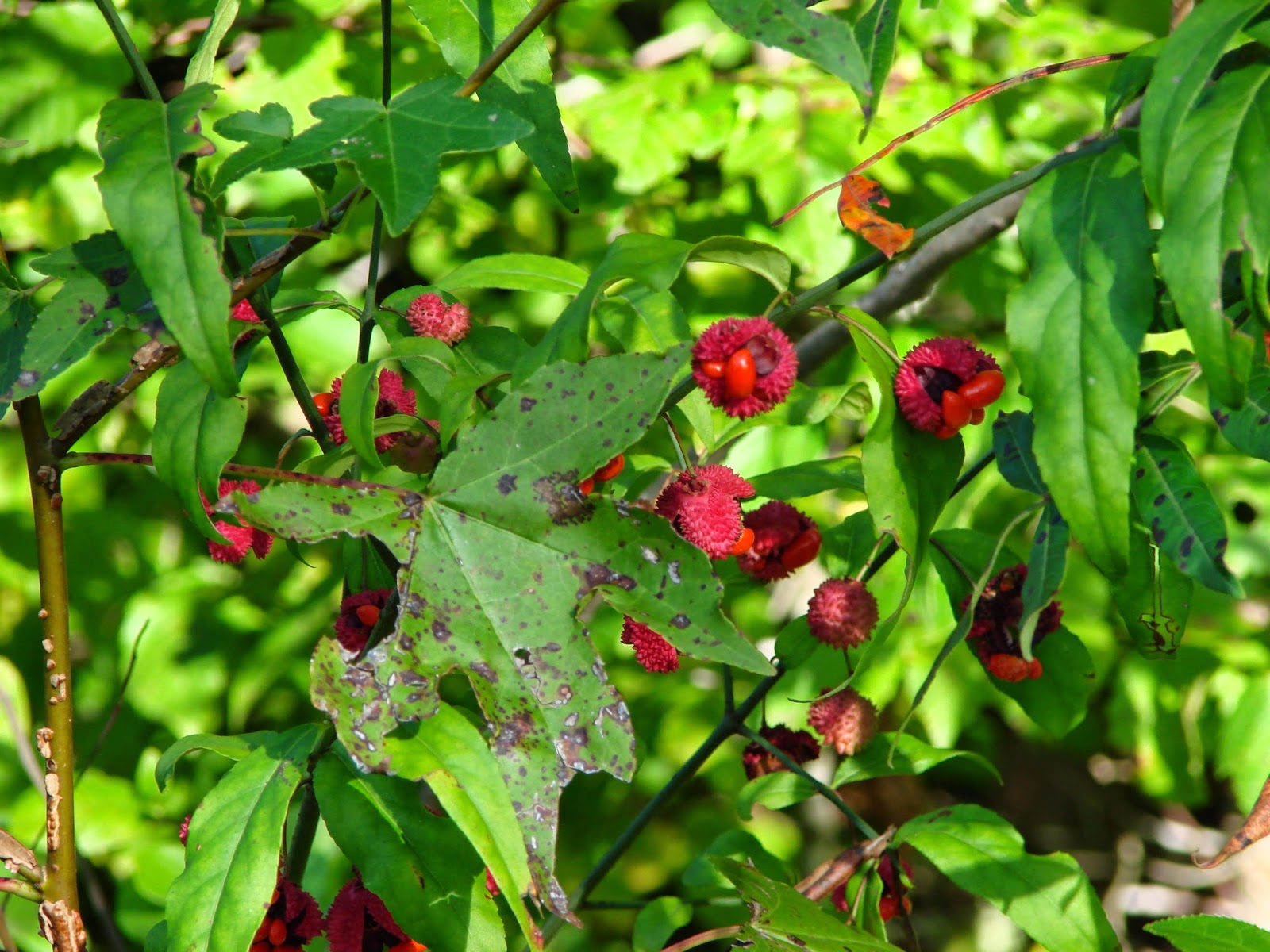 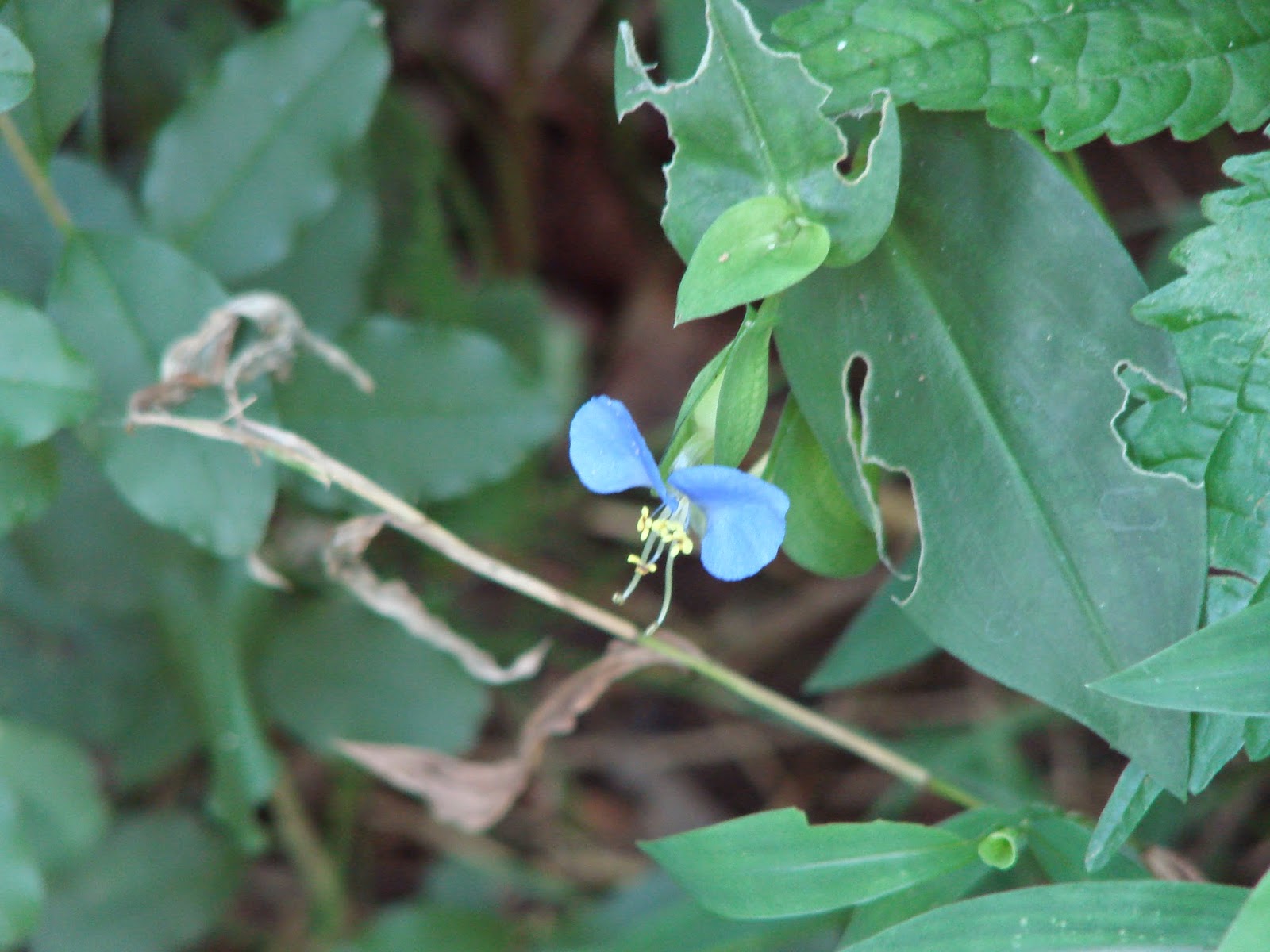 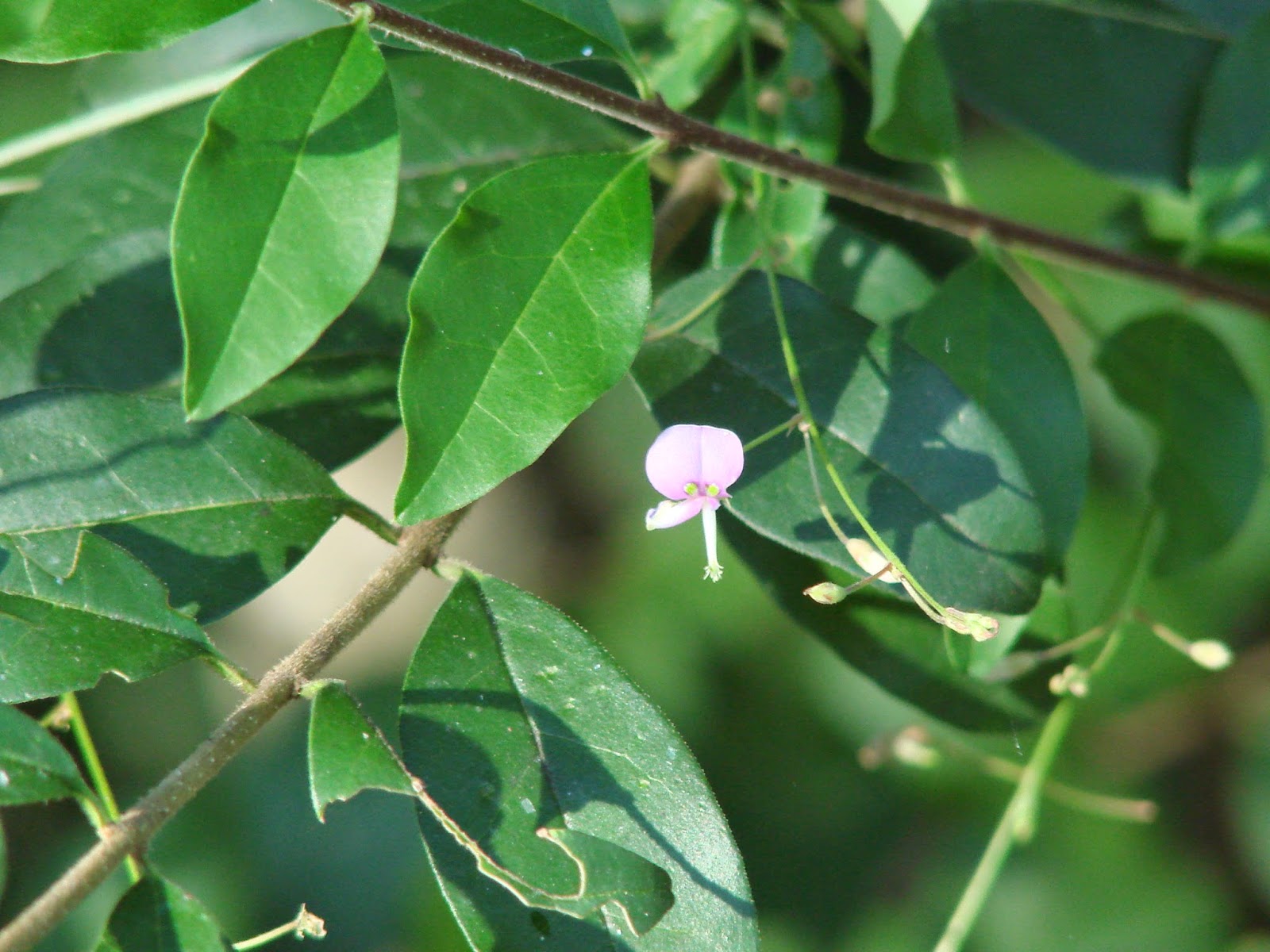 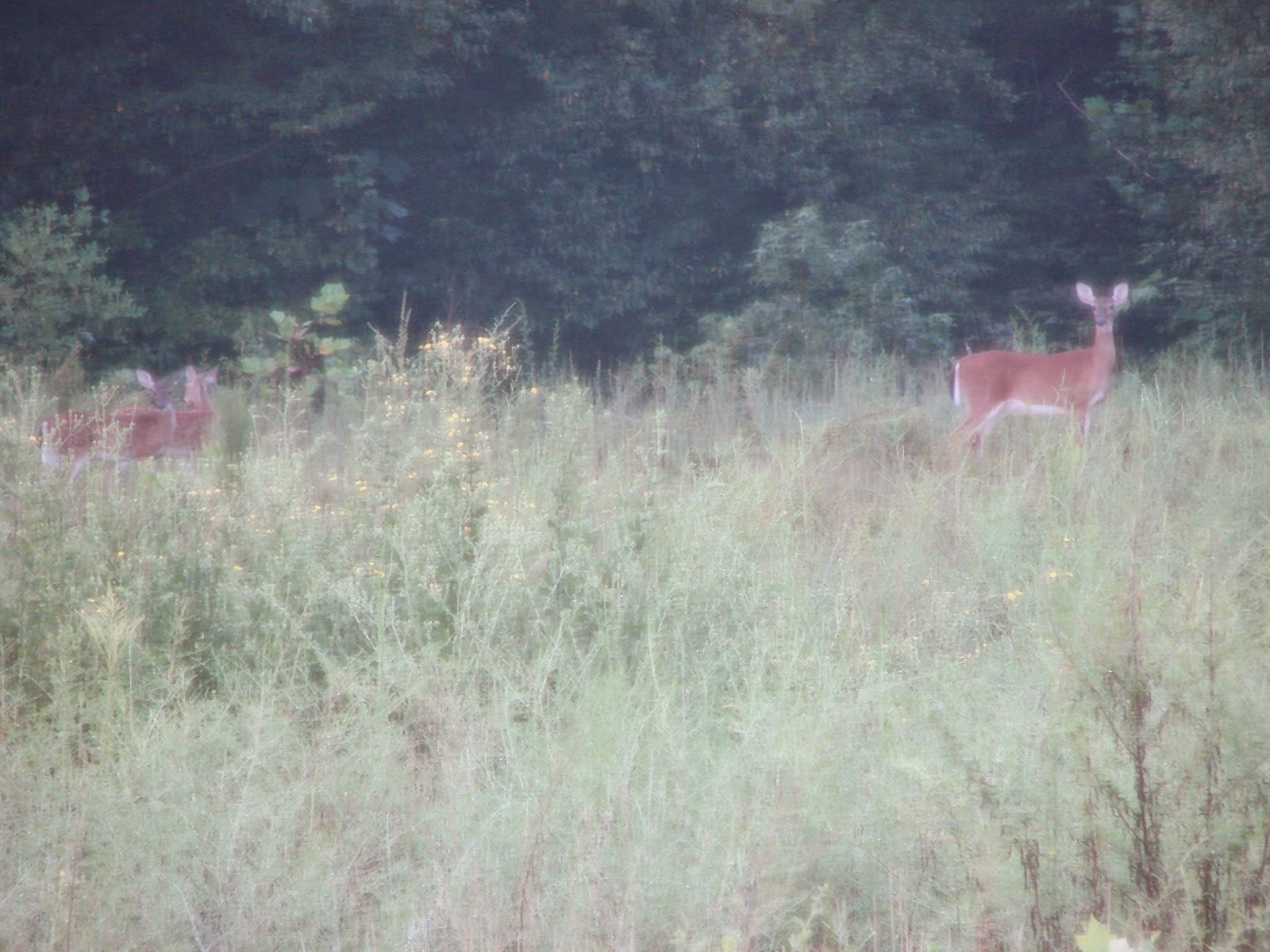 One must watch for the 'road signs' along the Gossamer Trail... they come in all shapes and sizes. 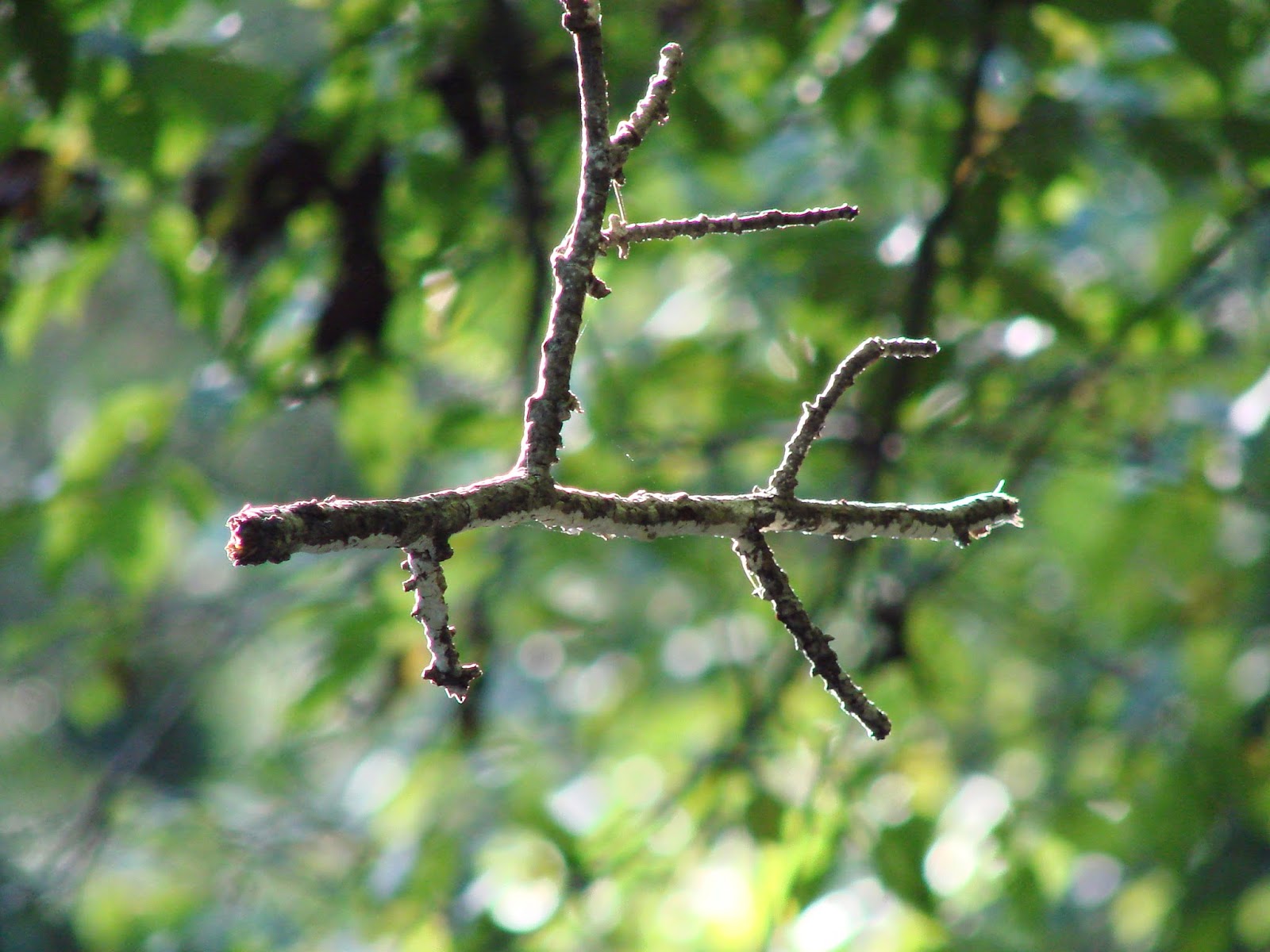 With Gossamer Trail clearly in sight... 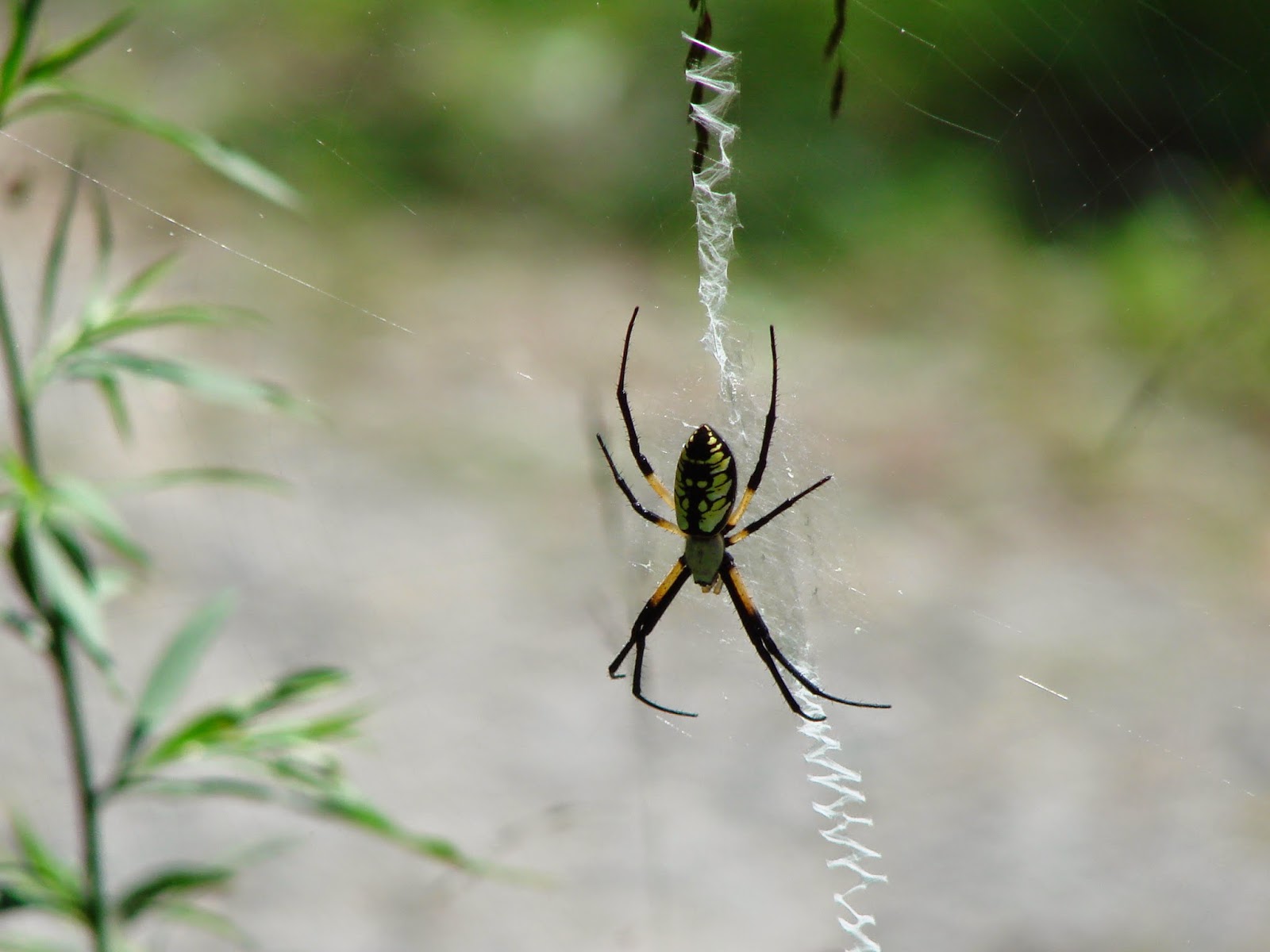 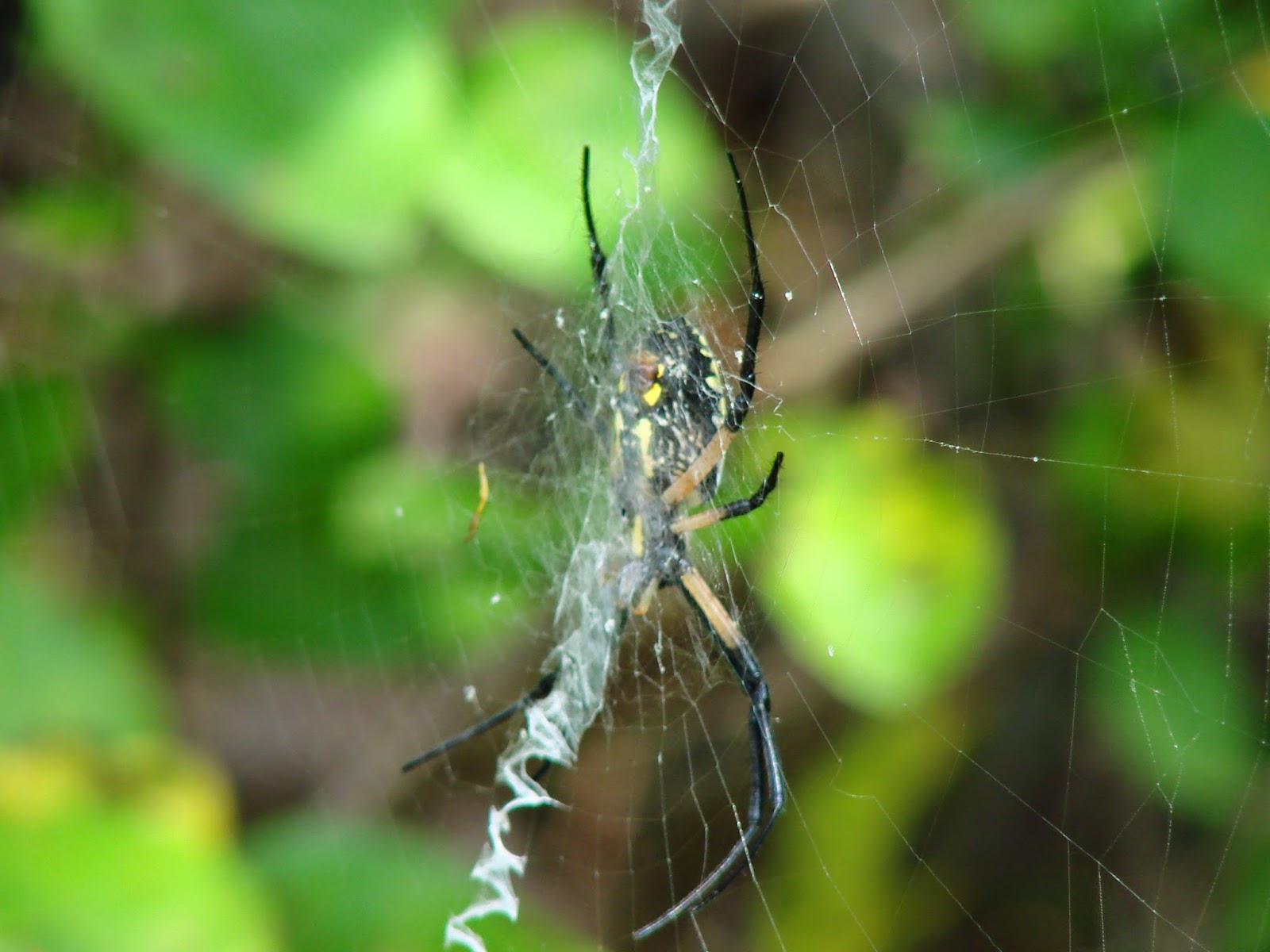 It's likely September when the spectacular Golden Orb Weavers make their silk work known. This lady (Argiope Aurantia) has gotten quite used to Keeli and I checking in and taking her picture!     The zig-zaggy (cribellate) weave is a tell-tale to identifying her.
Each knat in that extra-sticky capture spiral is one less potential bite... on my neck or ankle.
Bon Appetite Girl! Eat hardy...
... along the Gossamer Trail.
﻿
Posted by GMLesley at 3:15 PM No comments: